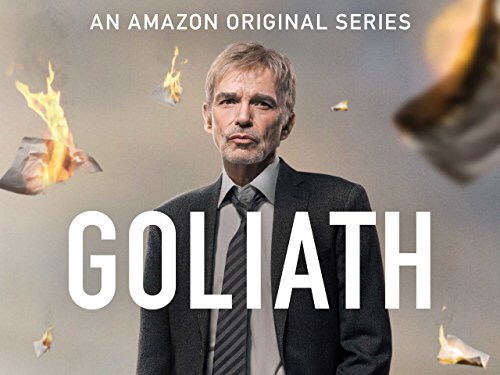 I had high hopes for Goliath. It stars Billy Bob Thornton, whose mere presence alone exponentially raises a show’s stock value. In fact, it’s safe to say if a Thornton vehicle fails, everyone but Billy Bob Thornton could be to blame.

The show surrounds a once powerful lawyer, Billy McBride (Billy Bob Thornton), who is now a washed up alcoholic that hasn’t seen a courtroom in years. When he reluctantly agrees to pursue a wrongful death lawsuit against the client of the massive law firm he helped create, Billy and his resource-limited team uncover a deadly conspiracy. The life-threatening conspiracy actually gets Billy’s original client killed, only to be replaced by the young son of the deceased who also has a claim for wrongful death. That decision has holes, especially since if the defendant is a murderer, one might think twice about putting a child’s life in jeopardy. Plus, wouldn’t it make more sense to kill opposing counsel instead? It’s certainly more efficient. The story also unfolds far too quickly, and the defendant’s true crime and subsequent cover up becomes clear by episode three, thereby eliminating my interest.

David E. Kelley once reigned supreme in this arena, having created some of the best law shows of all time, including LA Law, Ally McBeal, Boston Legal, and The Practice. His sweet spot has always lied in his quirky characters coupled with a thorough understanding of the law and all its intricacies. As a lawyer, I feel confident in saying that he’s nearly always accurate, unlike many other law shows that cause me physical pain. The problem with Goliath, is that it’s as if Kelley forgot that sweet spot and nearly made it an afterthought. Most of the happenings take place outside the courtroom, and very little of the show is dedicated to the actual law. For example, it’s hard to believe in Billy’s talked-about talent when we never get to fully explore his skill set. He’s seems more like a crazed cowboy than a gifted lawyer, and that’s unfortunate. At least Kelley got his quirky characters right.

Having said all of the above, I’d give the show a solid C+, meaning it’s armchair enjoyable while watching my dishes, It is not; however, popcorn television.