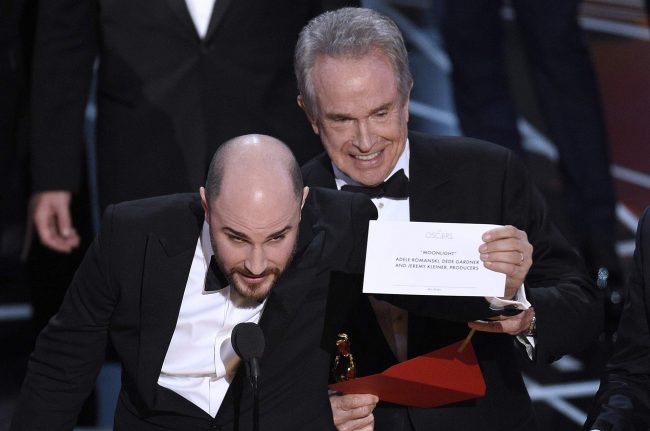 Before we discuss who is to blame for the infamous envelope gaffe for the Best Picture announcement at the 89th Annual Academy Awards, let’s get our facts straight. I’m a lawyer, and I love facts. First and foremost, who’s responsible for any and all of those envelopes and can just anyone put their hands on them? The answer is no. Two people are responsible, and it’s PricewaterhouseCoopers accountants Martha Ruiz and Brian Cullinan. Cullinan and Ruiz each have a briefcase with envelopes of each winner, and they stand on either side of the stage so there’s an envelope ready, no matter what side the talent enters. This means that each category has a duplicate envelope. Once an envelope is distributed, that duplicate should be discarded, so this very situation does not happen. If it is not discarded, the stack becomes disrupted. Because Emma Stone’s award was given immediately before the Best Picture announcement, it stands to reason that an envelope was not discarded, and Cullinan reached for the top of the stack without looking. And why did I single out Cullinan and not Ruiz? Because according to TMZ, the 30-year-veteran of PwC was responsible for handing Warren the card. TMZ also said that Cullinan spent most of the night tweeting, and he even tweeted a picture of Emma Stone while he should have been preparing for the next category.

Here’s the full statement from PwC, aka Price Waterhouse Cooper:

We sincerely apologize to Moonlight, La La Land, Warren Beatty, Faye Dunaway, and Oscar viewers for the error that was made during the award announcement for Best Picture. The presenters had mistakenly been given the wrong category envelope and when discovered, was immediately corrected. We are currently investigating how this could have happened, and deeply regret that this occurred. We appreciate the grace with which the nominees, the Academy, ABC, and Jimmy Kimmel handled the situation.

Now that we know the culprit, let’s analyze how it was handled. For starters, this is Warren Beatty’s third time presenting in this category. Jack Nicholson holds the record of eight, and Audrey Hepburn is second with four. Why do I mention this? Because the more seasoned you are at an activity, the less likely your brain is to shut down during a crisis. It’s not Beatty’s fault, but he knew something was wrong and panicked. Though he turned to Faye Dunaway for help, it was not clear that he was in fact asking for help, and Dunaway rattled off the winner without looking. TMZ also reveals that Dunaway and Beatty battled over who would announce the winner, and perhaps she rushed for fear that Beatty would steal the moment. I feel bad for Beatty, but I also feel he should be seasoned enough to handle a situation like this.

Next up? Reports suggest that there was immense backstage chaos when the mistake was revealed, and La La Land producer Jordan Horowitz said that he knew something was awry when someone ran up to him to ask for his envelope. After opening it, the mistake was confirmed and everyone seemed unable to function in the pressure-filled debacle. La La Land producer Fred Berger was the first to speak, saying, “We lost by the way but you know.” Berger was clearly disappointed, but his comment did nothing to move the moment forward, which needed to happen because Moonlight was the rightful winner, and as each second lapsed, they lost the opportunity to celebrate their win.

La La Land producer Jordan Horowitz came to the rescue, and immediately announced the mistake. He then graciously said he would be “really proud to give it to [his friends] from Moonlight.” As the crowd stood in disbelief and Kimmel, Beatty, and that frantic guy with a headset did relatively nothing, Horowitz quickly insisted it was not a joke, took the card from Warren Beatty’s hands and showed it to the audience as proof. Of the pivotal moment that proved his status as both a gentleman and a fixer, Horowitz said:

Listen, I’m a producer. I gather things together and I change directions and I march things forward. I had just finished saying how much love there was in the community and I want to do diverse and bold work, and so to be able to actually put that into action and make that physical by bringing those guys up onstage and giving them the award that they won…I don’t want to say it was an honor, because it was really confusing, [but it felt right].

There are a few lessons to be learned here. First, don’t get greedy. Just because you’ve been doing something for decades doesn’t mean you can tweet during the most important moment of your job. Second, this is Hollywood, not brain surgery, and there are very few professions that involve such insane indulgence. Oral surgeons don’t get awards for treating periodontal disease and though the Oscars are fun to watch, these Viola-Davis-style acceptance speeches are too grandiose to tolerate. The point? Let’s all take a step back and get some perspective. No one died. Third, to contradict point number two, I feel bad for the producers of La La Land, because they walked away with nothing. Sure the movie garnered Oscars, but not one for their specific role, which is a bummer. The fact that Horowitz could look out for his friends while processing his disappointment should be appreciated. Fourth, when something goes wrong, get your bearings, then speak up. And fifth, Jack Nicholson has to come back.