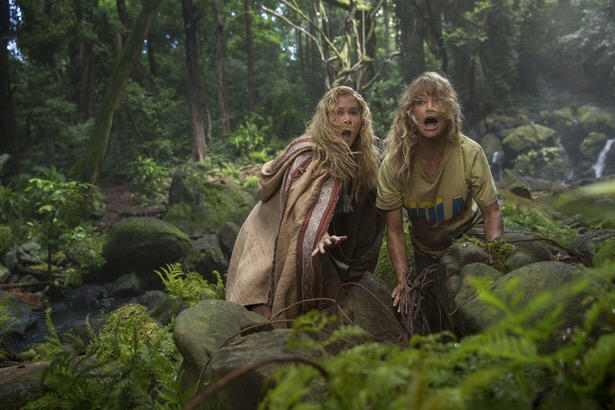 There are a few problems with SNATCHED, none of which involve the casting. With legendary Private Benjamin star Goldie Hawn beside Trainwreck’s Amy Schumer, you’ve got comedic gold. But the perfect comedic pairing is only as good as its script, and this effort falls just short of its potential.
Amy Schumer plays Emily Middleton, a selfish dreamer whose boyfriend Michael (Randall Park) dumps her just before their exotic vacation. With two non-refundable tickets to paradise, she reluctantly turns to the one person who says yes, her mom Linda (Goldie Hawn). Emily and Linda’s relationship has become distant, but when Emily discovers her mother’s fun former life, she thinks its the perfect opportunity for Linda to loosen up.

Once they arrive in paradise, Linda’s ultra-conscious, over protective nature clashes with Emily’s live-in-the-moment mentality, and their mother-daughter bonding gets derailed. Needing a break from the smothering, Emily heads to the hotel bar where she meets the very handsome James (Tom Bateman) who convinces the pair to come with him on a road trip to explore the local culture. Hypnotized by his charm, she ignores her mother’s warnings and they soon fall into a trap orchestrated by the treacherous Morgado (Oscar Jaenada). They escape due to a lucky accident, but when they call the US State Department, Morgan (Bashir Salahuddin) is hilariously unsympathetic to their situation.

They make one last call to Ruth (Wanda Sykes) and Barb (Joan Cusack), who they met at the resort. Barb is retired special ops who is always ready to return to action and Ruth is Barb’s hype man, since Barb can’t talk.They later meet Roger (Christopher Meloni), a guide who exhibits questionable abilities as an outdoorsman, but promises he will get them safely to Bogota.

When Amy Schumer did the press tour for this movie, she told Howard Stern that she resented the endless questions about gender. If the press would simply stop asking the same questions, perhaps the sexism would go away faster. As for Hawn, she received the inevitable, offensive questions about ageism and where she’s been for the last 14 years. Though she’s been actively pursuing charitable endeavors, I can only imagine her exit from the spotlight also has to do with the limited roles in Hollywood. Hawn is a star, and she’s not going to take that small supporting role simply to remain in play. She has a rich personal life, and that is enough. Schumer has said time and time again that the studio did not want Hawn for the lead, and she fought for her. If that’s true, she should have kept it to herself, but that’s neither here nor there.

Despite all the proper elements for a hit film, this simply is not funny enough. Schumer and Hawn hit their lines out of the park, but they’re few and far between. Also, there’s little to no story here. Sure they get kidnapped and held for ransom, but . . . that’s it?! I began this review with a long plot, but in truth, the film can be summed up rather simply by saying, “A mother and daughter get kidnapped in a foreign country while on vacation and make a desperate attempt to escape.” That’s literally the entire movie. It’s a high-concept, unoriginal story that therefore lives and dies by the filler jokes. And if there are not enough filler jokes, it doesn’t work. Look at Hangover, for example. It’s just about a bachelor party, but the hilarity is in the details. Bachelor parties have been done a million times, but they offered a unique spin. That did not happen here, which is a shame, because I sure do love Goldie Hawn.