Skip to content
The stars came out for the latest installment of the Star Trek enterprise, and they sure look good (see the very yummy Chris Pine below). The film is set for release May 17. Enjoy the photos from their world travels. 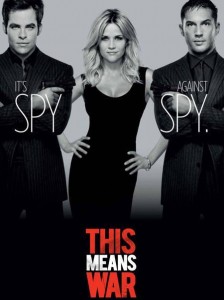 If you’re making a romantic comedy with a sub-plot, the sub-plot should make sense. Remember True Lies? That’s what made it so great. In This Means War, the only thing I know about the main characters’ profession is that they are CIA agents trying not to get killed by a mysterious man with an accent. The romance begins when they both meet the same woman, and they decide to compete for her affection. It gets complicated when they use their CIA resources to trace each others’ dates, and it gets funny when they use those resources to impress her with the contrived commonalities they discovered by researching her life at the CIA. It’s certainly entertaining, but the impressive concept failed in its execution. That being said, it’s good enough to see. After all, who doesn’t want to stare at Chris Pine’s beautiful blue eyes for an entire movie? You cannot go wrong.
Overall Rating: 3/5 Dishes