Kate Moss has an upcoming pictorial for Playboy Magazine’s 60th anniversary January/February 2014 issue, and the above picture is a seductive sneak peek for your enjoyment. You’re welcome. 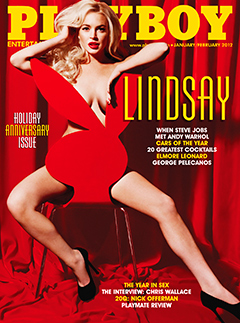 When Marilyn Monroe appeared on the first issue of Playboy Magazine in 1953, it was revolutionary. Hugh Hefner battled against American’s puritanical values and brought sex into public conversation. But decades later, sex is everywhere. Actresses sexualize themselves to become popular, and almost every A-lister has graced a magazine cover nearly naked. So when Lindsay Lohan posed for Playboy Magazine, I wasn’t impressed. First, she’s already been naked numerous times, thereby decreasing my curiosity, and second, the pictures are heavily airbrushed. Unfortunately or fortunately, her career plummeted, and the Playboy shoot probably provided some much-needed cash. The end of an actresses career is very similar to the beginning — you take what you can get, because the offers are limited. So she did. And though she’s certainly pretty enough to pull this off – I find it generally boring. 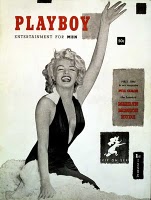 My favorite law school professor once said, “people think the United States moves at a snail pace. That’s true of everything but sex.” At the time, he was discussing obscenity laws, but the vintage Hugh Hefner interview below reminded me of his claim. It’s interesting to see how revolutionary Playboy magazine was, propelled by Hugh Hefner’s own chutzpah. Sure there’s still a plethora of people preaching abstinence, but we’ve definitely come a long way. Watch below.

“When you’re almost 90 years old you don’t have the luxury of waiting to recover from something. You get one day and then you go, ‘let’s live some more life.'” Howard Stern on Hugh Hefner having a new girlfriend so soon after his fiance left him. 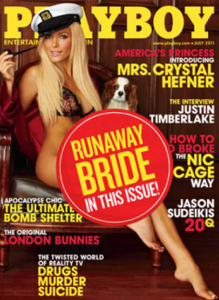 Hugh Hefner isn’t just a smart business man — he also has a sense of humor. Instead of letting Crystal Harris’ Playboy Magazine cover run with a “Mrs. Hefner” title, he decided to alter the issue by slapping a “Runaway Bride” sticker on it. I find this especially funny because it actually ruins Harris’ dream cover, considering her well-toned body is now slightly covered with an ugly sticker. Good job, Hef!