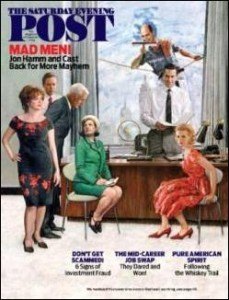 The Saturday Evening Post sat down with series creator Matt Weiner, Jon Hamm and five other key cast members to celebrate the final season of Mad Men. Below are some excerpts from the piece.

“Don Draper is a guy that looks good in all appearances and yet is essentially a disaster.”

January Jones (Betty) on fans’ reactions to her character

“People come up to me, and they straight up say that they dislike me.”

“The wildest thing I’ve bought is a Japanese toilet, a Toto, a fancy and expensive toilet … The Ferrari of toilets.”

“You watch yourself on the audition tape and flashback, ‘Oh my God, I started out and my kid was six years old, and he’s in high school now.’ You change, especially physically. I feel like I’m 100 years older than when we started.”

Elizabeth Moss (Peggy Olson) on character judgments
“The only time I heard a problem was people questioning my character’s choices in dating. Which I have in real life as well. But I’m always like, ‘Really? You never made a mistake in who you dated?’ And that’s Peggy’s story. She keeps making her mistakes over and over unfortunately.”

Christina Hendricks (Joan Harris) on the new attention focused on her
“I’ve had days of anxiety or panic about being looked at or being talked about, and that’s made me just want to stay home.”

Executive Producer and series creator Matt Weiner on fans’ investment in the show
“It’s been an education for me to realize that what a lot of people find entertaining is feeling superior to the activity that’s going on on the screen. They want to have their values reaffirmed; they want to have this sort of narcissistic gratification of ‘I know what’s going to happen.’ ‘I know how this world is going to work out.’ Or, ‘Thank God I’m not like that.’”

Hamm on the secret to the show’s success
“There are so many variables. At any point in the development of the show, somebody could have made a decision that ruined it. They could have put a flaw in it and magnified over time, but it didn’t happen. Instead, everybody made the right decisions, because everybody is in it for the right reasons.”

Since celebrities shockingly made the baby craze cool, I’ve posted excerpts from Mad Men’s January Jones interview with Mom.Me about her new role as a mother. Read the entire interview here. And yes, I’m aware that this picture is inappropriate for the story, but they didn’t send me an image, and I have a thing for women’s breasts. What can I say?

On advice for working moms:

I think that as hard as it is, that if you have something that you love outside of being a mother, you should definitely maintain it, because it makes you a better mother.

On how being a mother changed her opinion of her character, Betty Draper:

I try not to judge her. It’s like she’s a relative you are embarrassed about. I disagree with her a lot … I don’t think I’d be her friend, but I defend her fiercely when someone says something about her.

On Betty Draper’s influence on her as a mom:

Well, I certainly don’t take anything from Betty home. I have nothing in common with her when it comes mothering. I don’t see it as a burden or irritation. I feel very lucky and I feel like it was something that I was meant to do. I’m at the right age and the right time in my life where it’s just so much fun. And I don’t think Betty sees the fun in that … I think she sees it as an inconvenience.

On playing a mom from a different era:

At the same time we are so rigid and so worried about every little thing now. I had no idea how many warning labels are on kid’s stuff. Everything is warning, warning, warning. You just kind of do the best you can. 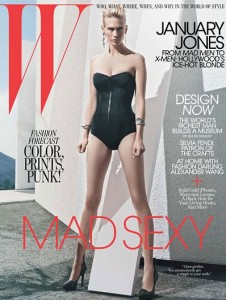 ” . . . if I remember correctly, she and I were very rude to each other. It was crazy. I was at a party — I’d never met her — and she was like, ‘Come sit down.’ So I sit at her table and talk for ten minutes, and she goes, ‘I think it’s time for you to leave now.’ So I say, ‘January, you are an actress in a show and everybody’s going to forget about you in a few years, so fucking be nice,’ and I got up and left. And she thinks that’s funny?” Zach Galifianakis’ take on his awful January Jones encounter, after recently hearing that she called him “the most naturally funny man she’d ever met.”