and before you all start ragging on my rug – let me say this, my nipples are fake, too. I don't care to discuss it further.

I find sweet pleasure in picking on Jason Alexander’s hair piece, and it’s not because I have an evil heart. It’s nice to see Hollywood take a hit at a man’s awkward appearance for a change. One thing is clear though, and it’s that Jason Alexander is completely ridiculous. I’d like to think that the intention of all aesthetic change is to trick the public into thinking it’s natural. And while many women with inflated breasts and frozen faces might violate that rule, it’s still a viable standard nonetheless. Where is Elaine Benes to rip that off his bald head when you need her? Watch Jason discuss his fake hair with Craig Ferguson below. 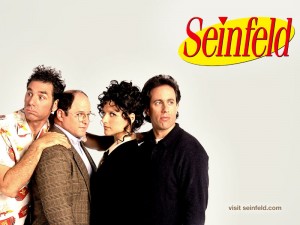 Did Jason Alexander have a talk with Jeremy Piven about toupee’s or something? I have absolutely no idea why the guy would decide after all these years to put fake hair on his head, especially considering the entire world knows him as the very bald George Costanza. Isn’t this akin to an actress getting gigantic breast implants after living a public life with a flat chest? And speaking of George Costanza, I’ve attached the Seinfeld clip below, where Elaine rips his toupee off his head and throws it out the window. Perhaps she can crash a red carpet and do him the same favor twice. For purposes of nostalgia and laughter, watch the clip below.