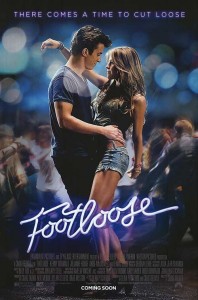 This movie never stood a chance. It’s a remake of a fluke hit, and the original story is dated. But it’s a library project owned by Paramount, so the studio stood to gain a substantial amount of money with very little financial investment. Translation? — Greed surpassed creativity. Remakes are easy because the title recognition alone saves a tremendous amount of money marketing the film, and there’s a hope that nostalgia will bring people to the theater. But if you’re gonna do it, do it right.

The biggest problem in this film is the casting. Though Julianne Hough was impressive, Kenny Wormald was an unfortunate miscast. I think he has some serious potential as an actor, and he’s certainly capable. But he was doomed in this role. He’s a nerd in cool-guy clothes, and his lack of chemistry with Julianne Hough made it impossible to believe that a girl like her would ever find him attractive. And speaking of those cool-guy clothes, something went seriously wrong in the wardrobe department. The costume designer took almost every single outfit from the original movie. We aren’t in the 80’s anymore, so if you walk into a school with your collar up today, you’ll likely get picked on for looking ridiculous. Furthermore, Kevin Bacon was considered “cool” in the original story because of his big-city, anti-establishment attitude, which came as a shock to the small town. The only thing anti-establishment about this kid was his Boston accent.

I presume Kenny Wormald landed this role because of his dance background, but given there are only three choreographed dance sequences in the film, I think the old-fashioned rule of cinema applies here — it’s easier to teach an actor to dance than it is to teach a dancer to act. And if they were going to prioritize the dance background, I actually think that when Zac Efron dropped out, Derek Hough should have been hired and Julianne Hough should have been recast (obviously because her real-life brother cannot play her love interest). The male lead is more important than the female lead, and Derek would have been a stellar choice. But that’s neither here nor there.

And to pre-empt your you-like-to-pick-on-the-new-guy attack, I’d like to also point out that Dennis Quaid was another unfortunate miscast. Sure this movie needed some star power to lend it some big-studio street cred, but Quaid just doesn’t look like an uptight preacher. He’s a proven talent, but even great actors can’t pull off the wrong role. The shoe has to fit before you start to walk in it.

The other issue is that the story is too true to the original film. In fact, with the exception of the iPod use, it’s a carbon copy. The purpose of a remake is to take a great story and modernize it. Remember ‘The Thomas Crowne Affair’ with Pierce Brosnan? It’s the same great story, but it’s nearly unrecognizable compared to the Steve McQueen version. Without a new spin, it would make more creative and financial sense to re-release the original. I think Craig Brewer (the director) should have substantially changed the original story, or at least changed the clothes. For goodness sakes, the kid even drove the same car.

But despite the trouble, I’d still say the movie is enjoyable enough to watch. There just aren’t enough cheesy films out there, and this fits the bill.