Skip to content
Jennifer Aniston is not only a seasoned professional, she’s also a class act. She encountered an adorably awkward interview with the now infamous Chris Stark of BBC Radio 1’s The Scott Mills Show (see Mila Kunis), and her responses are sure to make this a viral sensation. Stark asked a series of unintentionally ridiculous questions, and Aniston answered them all. Haven’t you always wanted to know if Jennifer Aniston has a ‘free pass’ list in her relationship with Justin Theroux? After all, isn’t that a little too easy to accomplish given her celebrity status? Watch below to find out her answer. As an aside, doesn’t this squeaky kid remind you a little of Hugh Grant?
Written by: Dan O’Connell, Guest Contributor 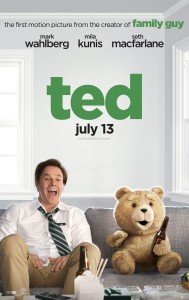 Hilarious extended riff on the wish-fulfillment storyline, a blue collar Boston guy (Mark Wahlberg) tries to balance his relationship with his extremely patient fiancee (Mila Kunis), and his stuffed bear Ted (voice of Seth MacFarlane), who came to life when he was eight after a Christmas wish. Now, Ted has turned into the equivalent of a former child star, getting high and sleeping around with hookers, and attempting to make it on his own with a crummy minimum wage job.

MacFarlane gets a lot of flak for running the pop culture references on “Family Guy” into the ground, as well as overly relying on non-sequiturs, but the guy knows how to keep a 90 minute feature afloat, and he keeps the laughs coming consistently. As for Wahlberg, he proves once again after his great comedic turn in “The Other Guys” that he knows how to play the straight man. Though the film ladles on the schmaltz a little too much toward the end, it’s a consistent laugh from beginning to end.

There’s something highly suspicious about Justin Timberlake’s attendance at the Marine Corps Ball. Where was Mila Kunis? Did she flake? Timberlake has received a considerable amount of positive press for attending, but there’s been no mention of Kunis, who accepted the invite long before Timberlake. In fact, it was Timberlake who encouraged Kunis to attend the event during the promotion for their film, ‘Friends With Benefits.’ So where was she, and why hasn’t the press either confirmed her attendance or explained her absence? Though I’m not sure of the explanation, allow me to say that I’ve heard from numerous inside sources that Justin Timberlake is one of the nicest guys in show business. It’s good to know that my sources were confirmed by Corporal Kelsey De Santis.

UPDATE: It’s been brought to my attention by a very kind reader that Mila Kunis was invited to a different ball, which takes place this Friday in Greenville, North Carolina. Major apology to Mila for The Dishmaster flop.