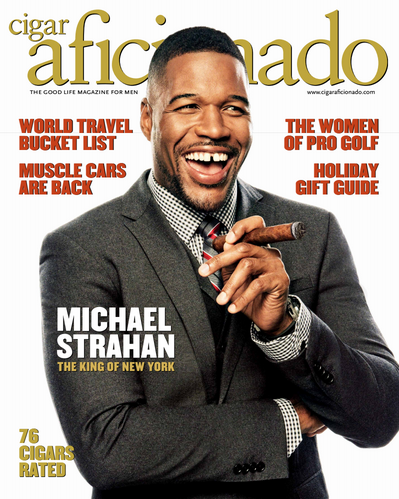 NFL great and television talk show host Michael Strahan sat down with Cigar Afionado for an exclusive interview, and the gentle Giant talked football, the limelight, and what’s next for his career. Read some choice quotes below.

On his football field strategy: “I always looked at football as psychological. It was like chess, where you’re figuring out what your opponent’s next move will be, or how to make them move where you want them to…That’s one of the things I miss—that chess match.”

On the difference in his life since leaving football: “I’m not sore every morning.”

Co-host Kelly Ripa on Strahan’s surprising shyness: “All he has are strengths. He can talk about anything…If charm was a drug, you could extract it from his body and give it to everyone…People run up and hug him. They see a big personality. But in his private time, he’s really very shy.”

On his “Live with Kelly and Michael” audience: “Those are the only ones we really think about talking to. If I started thinking about how many people are actually watching us on TV, it would freak me out.”

On being in the limelight: “One of the most embarrassing things to me is people yelling out my name in the street, I want to be the guy who can walk in and out of a room and you don’t know I’ve been there…I miss being able to sit in a restaurant and not have people try to sneak a photo with their cameras.”

On finding anonymity within the community of cigar smokers: “Cigars solicit conversation. You see someone smoking a cigar and you feel instantly closer to them.”

On his choice cigars: “For the most part, I like my cigars light and sweet. Sometimes, though, give me something robust that will knock my socks off. I think the little ones look funny in my hand because I’m such a big guy. But I don’t want a cigar that’s the size of my thumb either.”

On his many ventures off of the field and what’s next: “Someone asked me what I’d like my legacy to be. When I thought about it, I decided I’d like to have been more successful outside of football than I was in it…I’m not done yet. I’ve got a long way to go.”

The Baltimore Ravens released Ray Rice after TMZ published a very disturbing elevator video of a fight between him and his then fiance, which ended in Rice knocking her unconscious, followed by a feeble attempt to help her. The two married shortly thereafter, and she refused to testify against him. Though the NFL insists it did not see the video until today, many speculate that they had previously viewed the video and simply succumbed to pressure by suspending him upon it’s public release, instead of the much more lenient two-game suspension they previously gave him. And now that you have that back story, watch the video below to see Fox & Friends make light of domestic violence with bad jokes about “taking the stairs.” It’s nice to see that Elisabeth Hasselbeck has grown a sense of humor since leaving The View though. Sometimes a change of venue is just what the doctor ordered.