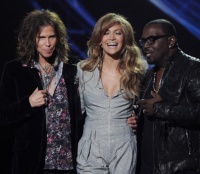 I received a call from a friend tonight who keenly smelled a rat after watching Jennifer Lopez attack Haley Reinhart’s rendition of Michael Jackson’s ‘Earth Song.’ Lopez said that even though the song was “inspiring,” she needs to think about the competition itself when she performs, followed by a condescending use of the word “baby.” Since Jennifer Lopez consistently avoids criticizing the contestants, her comments were suspicious. As it turns out, Lopez’s first husband, Chris Judd, is directly connected to Haley’s song. In 1997, Judd performed the song with Michael Jackson during Jackson’s German tour. So did Lopez project her bad memories onto poor little Haley, who got a verbal ass-whooping? It’s unclear, but here is what I know for sure — the judges are terrible. Watch Haley’s performance below, and watch the second video to see Chris Judd with Michael Jackson (he appears at the eight minute mark).