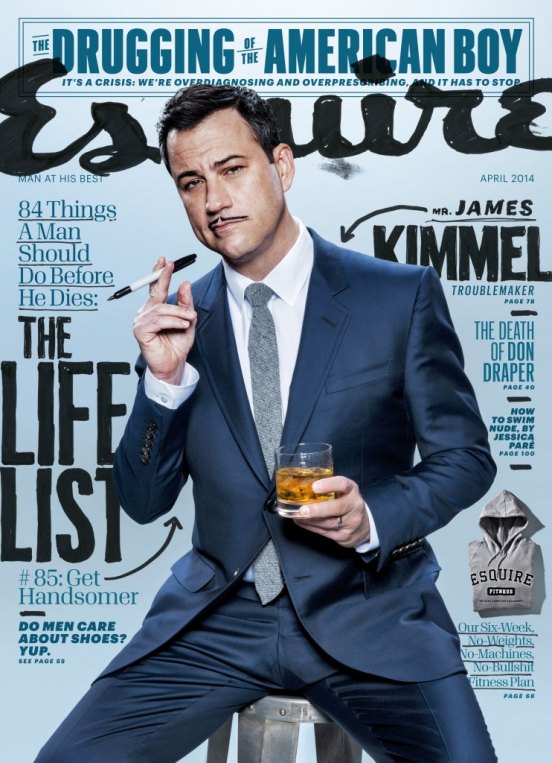 Jimmy Kimmel covered this month’s Esquire Magazine, and the late night funnyman gave us an inside look at some behind-the-scenes action, along with some very gross details about his father. Check out some choice quotes below.

“My only complaint about Jimmy Fallon is the first name: Jimmy. People get us mixed up all the time. No one remembers which Jimmy is which. Or they think I’m him, which can only make you feel like you should be him. Actually, he says the same thing happens to him. Jimmy. He’s like an athlete out there. He can jump high, act, sing. He’s a true performer. I’m a broadcaster. That’s how I come at this. Not a stand-up, not an actor, not a commentator. A broadcaster.”

“I always found that it’s not entirely bad, because the victims always tend to come through. They show their humanity. They go beyond their limits—try to help, drive to places that don’t exist, and come back to ask what they should do next, if only to make it all stop. I’m the asshole, yes, but they generally reaffirm their humanity. I always end up recognizing the fact that people are basically good.”

“The truth is, right now, Rob Ford is keeping me in business. There’s new video every day. The mayor of Toronto throwing candy canes at small children. The mayor wandering into a dance club. I don’t even have to write it. I sit back and watch him. He’s pranking the world.”

“This is the job. The only job for a person like me. I mean, I like to draw. I’m really good at it. I’m a good artist, and I think that’s what I would have done had radio not worked out for me. But here I am. You won’t see me doing anything else in the next twenty-five years.”

About texts from his father:

“My dad is fond of texting me pictures of his poop.” He sighs, looks at the phone. “They can be fairly impressive, but it’s always a little stunning.” Simply put: Why? “He’s just proud,” Kimmel says. “But he wants me to beg him to stop.”