Skip to content
It’s official! Dennis Quaid’s on-set meltdown was a Funny Or Die sketch. Most media outlets predicted the hoax, presumably because it was just too close to Christian Bale’s cartoonish (albeit real) rant. The greatest part of the bit below is the excerpt at the end revealing that Quaid’s career remained unaffected while the Banana bit the dust. It’s pretty clear that’s a hit at Bale and Hollywood’s backwards behavior.
Dennis Quaid's On-Set Freak Out: The Full Video from Funny Or Die
I continue to be mystified by the many talents of Kristen Bell, who has become a formidable force since ‘Frozen,’ along with an awe-inspiring crusade against the paparazzi, which has been a large success. Thanks to Bell and her husband, Dax Shepard, many of the most popular magazines have stopped publishing pictures of children, and I’m sure there’s more to come. Bell has now expanded her portfolio into parody, with a sketch on ‘Funny or Die,’ dedicated to the horrible state of minimum wage. WATCH BELOW.
Mary Poppins Quits with Kristen Bell from Funny Or Die
President Obama visited Zach Galifianakis for a sit-down interview about The Affordable Care Act, and hilarity ensued. When Zach asked, “What is it like to be the last black president?” Obama replied with, “Seriously, what’s it like for this to be the last time you ever talk to a president?” According to CNN, the White House invited celebrities to find innovative ways to promote the Affordable Care Act, as it’s success depends on having 40% of its enrollees be between the ages of 18 and 34. The Executive Producer of Funny or Die’s ‘Between Two Ferns’ then met with Obama’s senior adviser, and the rest is history. The segment was met with a lot of interrupting laughter and ad-libbing. Watch below, and go to Healthcare.gov to get covered. Now’s your chance! You have until March 31st. 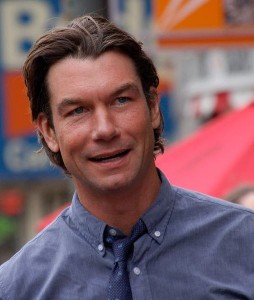 Jerry O’Connell’s unique sense of humor has long been Hollywood’s hidden secret. In fact, I didn’t fully notice until his frequent Howard Stern appearances, where the very funny man had free reign to shine. O’Connell’s most recent brilliance comes in the form of Funny or Die, which will film his new art exhibit called, #IAMSORRYTOO. The exhibit sits beside Shia LaBeouf’s competing endeavor, called, #IAMSORRY, which entails LaBeouf’s woeful attempt at an apology to Daniel Clowes, whose work he plagiarized. LaBeouf sits inside an empty room with a paper bag over his head that reads, “I am not famous.” He also has a table of items, which seem to represent different aspects of his “career,” including a Transformers toy. As for O’Connell, his paper bag says “Super Famous,” and one of his items is a DVD of Stand By Me. When asked about LaBeouf’s possible response, O’Connell said, “The only thing we’re fearing is that Shia, who I don’t know personally, is known to fly off the handle. I just need fair warning if he comes storming in here for a bagged man on bagged man fight because I can’t see out of this paper bag . . . I just need warning to take cover.”