Inside sources tell me that Jerry Seinfeld is a notorious curmudgeon with many demands and endless complaints. That revelation is not surprising given his interview with Seth Meyers below, where Seinfeld breaks the fourth wall on late-night television’s canned, cheesy style. To be fair, the spotlight seems exhausting, and the talk-show circuit is a five minute pressure cooker demanding a lot of jokes in a very short exchange. But when an A-lister like Seinfeld grants the courtesy of his appearance, it makes sense to assume he’d bypass the annoying pre-interview that just adds to his time. To quote Seinfeld, “you want me here, I don’t want to be here. So YOU engage ME.” Watch below.
Late night host Seth Meyers and The Approval Matrix host Neal Brennan visited Moviefone for an unscripted, behind-the-scenes take on their individual hosting style, along with some secret SNL tidbits. As for how Seth will approach his upcoming Emmy-hosting gig, you’ll have to watch below to find out. ENJOY! 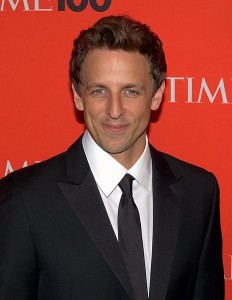