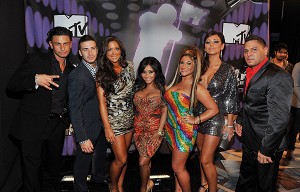 When a woman gets accidentally pregnant, there are many normal issues to consider. But when you’re on a hit MTV show and your entire career is predicated on partying, those issues become much more unique. And since there’s nothing funny about watching a mother get drunk and party, MTV is quickly planning for the future of their most lucrative enterprise, and they’ve therefore decided to phase Snooki out of their lineup. As for The Situation, there’s also nothing funny about watching a guy party when he has a known drug addiction. I sure hope those two clowns saved their money. It was fun while it lasted. Also — let this be a lesson to use birth control, especially when you have a few good years left on the biggest money-making-adventure of your life.
There’s a fine line between love and hate, and it’s clear after watching last night’s episode of Jersey Shore, Ronnie Magro and Sammi Giancola have experienced both.  My favorite line was said by, as always, Mike “The Situation” Sorrentino, after Ronnie screamed at him for “violating guy code” by telling Sammi about Ronnie’s many indiscretions.  When Mike witnessed Ronnie trashing Sammi’s stuff, he said, “Ronnie got pissed at me for guy code . . . it’s like . . . where is general human code?”  Watch the love affair below.  If only a man loved me enough to throw my bedroom set on the patio.  Such passion! 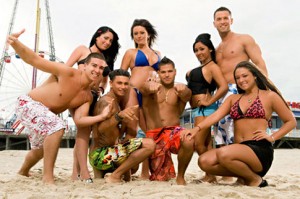 If anyone should be making oodles of money off of reality stardom, it’s Mike “The Situation” Sorrentino, of Jersey Shore. Almost every other reality star on television cannot even put two sentences together. Contrary to Kim Kardashian, Paris Hilton, Nicole Richie, The Housewives of Anywhere, and every cast member of The Real World’s last ten seasons, Mike Sorrentino actually has a personality, and he isn’t evil. Yes, the Jersey Shore folks drink lots of liquor and occasionally get it on with “grenades.”  But alcoholism and sexual promiscuity is far more respectable then ripping out hair extensions and rubbing someone’s toothbrush against a shit-filled toilet bowl. So congratulations to The Situation on his five million dollars, and please be sure not to squander your money on excessive GTL.