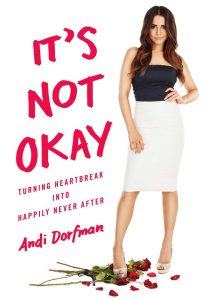 We can all remember that awkward, infamous moment on ‘After the Final Rose’ when Nick Viall revealed his sexual liaison with Andi Dorfman in an attempt to understand how she could so quickly cast him aside in favor of her chosen suitor and now ex-fiance, Josh Murray. “If you weren’t in love with me,” Viall said, “then why did you make love with me.” Andi called it a “low blow” and Murray revealed just moments later that he wasn’t phased by the incident. The press then pounced, with obvious questions about a woman could have sex with another man just one day before riding off into the sunset with Murray. And how is it possible Murray didn’t mind? Dorfman now reveals in her new book, “It’s not okay,” that things were not as smooth as she led us to believe. In fact, Murray allegedly called her a “bitch” and a “whore” during arguments, often reminding her of her decision to sleep with another man. He also thought she was “selfish” for wanting to return to work as a an attorney. Murray is predictably unhappy with her book, saying he prays she “finds peace.” And there you have it. Perhaps a dating show is not the proper way to find the perfect partner? Who knew?
Though Andi Dorfman was an ABC favorite after she axed Juan Pablo during her stint on The Bachelor, I still contend she’s far too difficult to be an in-demand Bachelorette. Sure she’s strong, but she’s also temperamental, and much like Deanna Pappas, I simply can’t see her appealing to a mass quantity of men. That being said, this should be an interesting season. As for the poster that poked at Juan Pablo, that copywriter deserves an immediate raise.
Despite popular belief, there is a classy way to dump someone, and listing your suitor’s flaws isn’t one of them. The Bachelor’s Juan Pablo certainly has some issues, but Andi Dorfman’s are far superior. In case you missed last night’s episode, Dorfman told Juan Pablo that she felt certain he was not “the one” after their fantasy suite and then curtly reviewed everything he did wrong, along with pointing out that he should eliminate “it’s okay,” from his vocabulary because, “It’s annoying.” It’s clear Juan Pablo cannot give Andi Dorfman what she needs in a relationship, but that’s more about incompatibility than fault. Dorfman is a successful, Jewish lawyer and Juan Pablo is a Venezuelan, Catholic, retired soccer player. If she thought this would work this long in the process, she needs a little more self-awareness. Relationships tend to thrive when people actually have things in common. And that’s no one’s fault.