If I were a contestant on The Voice, it would take me one millisecond to choose Blake Shelton as my mentor. The reason? He’s the only judge with post-show loyalty. It’s not about winning the show, it’s about what happens after you win the show, and a huge part of an artist’s success is whether other artists with more fame promote them. And Blake Shelton constantly promotes Dia Frampton and Xenia, two contestants from the last season of the show. Sure Adam Levine won with Javier Colon, but does he invite him to sing at Maroon 5 concerts? In fact, Dia Frampton is joining Blake Shelton on tour. You can’t beat that type of exposure. There is no way Christina Aguilera would make that same type of offer.

The greatest thing about getting famous is that you get to bring your friends along with you for the ride. That is — if you remember them on your way to the top. And Dia Frampton definitely remembered. She was one of the finalists on NBC’s breakout hit, The Voice, and she began her career as a struggling independent artist for years in the band Meg & Dia, where she performed alongside her sister. Though she’s now touring as a solo artist, she’s still performing with every member of her original band, a loyal choice that makes me love her eternally. When asked if her band was okay with the transition, she said, “There isn’t one straight path to get you to the end. There are stops, and reversals, and perhaps other routes . . . ” Listen to her song, “The Broken Ones,” from her new album, Red. 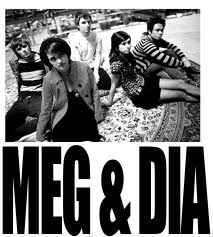 While it’s true that most of the contestants on today’s singing competition shows have had previous experience in the industry, for some reason the news that Dia Frampton had moderate success in the band Meg & Dia — floored me. Her image on ‘The Voice’ is that of a fledgling duck that’s trying to survive against more experienced veterans. She appears shy and has even discussed “stage fright” at certain points. In fact, I feel somewhat duped. To be fair, she discussed her experience with Meg & Dia in a recent interview, saying that she’s struggled for most of her music career and she’s even recorded “in tiny cabins where you can sometimes hear the hum of the dishwasher when the acoustic guitar gets real quiet.” Sure I feel sorry about that dishwasher thing — but judging from the video below — she’s no duck.