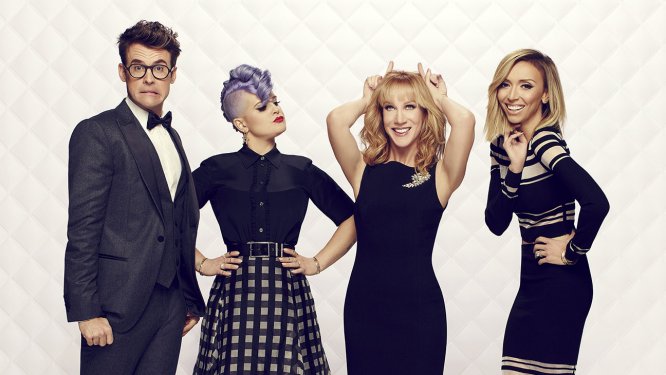 Kathy Griffin weighed in on the Guiliana Rancic controversy, and her take is far more classy than that of her cohort, Kelly Osbourne. Instead of trying to punch her way out of a paper bag with an angry twitter rant, Griffin gave an educated answer, explaining that Rancic should refrain from using joke writers, given that she already has enough inside content from being on the red carpet itself. She also said she nixed a “whore score,” segment, calling it “simply the lowest hanging fruit.”
While there’s certainly a lot of talk surrounding Marissa Powell’s flubbed answer at the Miss USA pageant, my concern actually surrounds Giuliana Rancic’s emaciated frame. I realize she’s been through a lot, and skinny-critiques are now looped in with overweight ones as part of the anti-digital-bullying movement, but something looks very wrong. Have we learned nothing from the curvy girls?! Dear God she looks thin.

Though I take issue with Giuliana and Bill Rancic’s incessant need to publicize every element of their personal lives, I can still take a moment to congratulate the happy couple on their pregnancy. Watch below to see the moment they heard the news.
END_OF_DOCUMENT_TOKEN_TO_BE_REPLACED