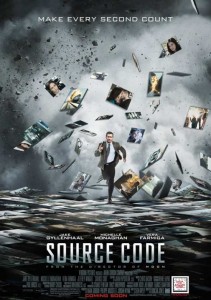 This film is a cross between Groundhog Day and Minority Report, and it is just inches away from being really good. Colter Stevens (Jake Gyllenhaal) finds himself on a train for exactly eight minutes, and then it explodes, killing everyone on board. After the explosion, he awakens in some kind of capsule, and he’s addressed via computer by Colleen Goodwin (Vera Farmiga). Stevens is part of a “source code” program, where he goes inside another person’s life for their last eight minutes before death. In this case, he becomes Sean Fentress, a man on the train with Christina Warren (Michelle Monaghan). He’s told that he has to find the bomber on the train, and he’ll keep returning to those last eight minutes until he figures it out. He uses that time to not only find the bomber, but to also research himself, because he has trouble remembering his own identity. His discovery provides a bit of twist, and I won’t spoil it. The problem with the movie is that it’s not a very good mystery thriller. The concept is intriguing, but his investigation lacks the creativity needed to keep the movie interesting. I imagine if I was part of this program, I would have solved the mystery the exact same way as Colter Stevens, which makes for a boring movie. He’s looking through people’s bags, he’s randomly assaulting and accusing passengers, and he’s generally freaked out the entire time. Because he’s in the military, I was hoping his approach would be a bit more specific to his strengths. Furthermore, since you never really get to know each passenger, there’s no tangible investment in the plot, and the bomber becomes pretty irrelevant. Mystery thrillers need to have more content. Concept alone isn’t enough. OVERALL RATING: SADISHFIED.