Skip to content
Simon Cowell used to advise his ‘American Idol’ contestants to avoid covers of powerhouse performers because unless a singer is capable of contending with the original, he or she will always be compared. So what happens when one powerhouse performer with the right pipes actually covers another? Watch below to see Celine Dion cover Adele’s “Hello,” which will bring you the first shot at a serious singing match-up. While Dion obviously lacks Adele’s emotional attachment to the performance, it’s extremely interesting to compare the two. 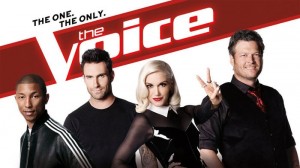 Rosie O’Donnell settled her feud with her ex-wife. Radar Online

Khloe Kardashian and Lamar Odom are staying together. MTV

Halle Berry and Olivier Martinez are being sued. ICYDK

Raven-Symone and her girlfriend broke up. HUFFPO

Selena Gomez has a crush on Chris Evans. E! Online

Famed and controversial photographer Terry Richardson is having a baby. DListed

A publicist admits to planting the Rihanna/Jay-Z rumors. Jezebel

Mariah Carey and her billionaire boyfriend are going strong. Yahoo

Jon Stewart’s told his writer to fuck off. Vulture

Brandon Jenner had a baby. Us Magazine

The Kardashians are blowing off those cocaine rumors. Jezebel

Nina Dobrev and her boyfriend are hot and steamy. People 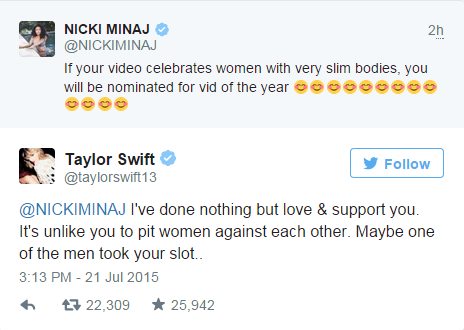 If you’re going to poke your fork in someone’s side and then run away, don’t be surprised when they come at you with a spatula. Because Taylor Swift won’t take a hit lying down, she directly responded to Nicki Minaj’s subtle twitter-dig in response to the MTV VMA nomations, after Minaj said, “If your video celebrates women with slim bodies, you will be nominated for vid of the year.” Taylor was swift to respond, saying, “I’ve done nothing but love & support you. It’s unlike you to pit women against each other. Maybe one of the men took your slot.” Minaj seemed flabbergasted by the cantankerous callout, insisting she did not directly mention Swift. Perhaps Nicki felt her hit was more at the process than the person, and in an effort to circumvent a Swiftie revolt, she quickly backtracked.

Here are the facts: Nicki was in fact nominated, but it was not for the category or video she wanted, and she therefore feels slighted. Is the industry racist? Sure it is. But MTV also sucks, so it’s quite possible their poor taste is responsible for any and all oversights. As for why Taylor Swift gets an insane amount of attention, it’s because her brand is impeccable, she’s kind to her fans, and her music is catchy. If you’re going to be salacious and polarizing (see Nicki Minaj’s bad behavior on American Idol), then you won’t please everyone, and the response will speak for itself.

The tits-out, glitter-fested image is tired, and instead of replacing her idea-men in favor of a fresh, younger focus, Mariah Carey will continue the untouchable diva routine into eternity. And while the melody is mildly satisfying, ‘Infinity’ won’t chart the way a Carey single should.

As a devoted Mariah Carey fan through every phase of her career, my advice is a serious PR, management overhaul with insiders accustomed to the music industry’s new model. Carey recently denounced ‘American Idol,’ in a funny move bringing her closer to a more authentic image, but that’s just the start, and her new video takes many steps back. Joining Match.com inside your new release is an embarrassing, dated move. Couldn’t she at least join Hinge? If you’re going to insert a bad idea, at least make it current. Watch the ‘Infinity’ video below.

Bristol Palin broke her silence on her called-off engagement. Wonderwall

Keira Knightly had a baby. Billboard

Aloha is accused of being racist. Moviefone

Kristin Cavallari is having a third child. US Magazine

Bruce Jenner will pose as a woman for Vanity Fair. USA Today

Zac Efron and his girlfriend are going strong. Pop Sugar

Another couple from The Bachelor bites the dust. Wet Paint

Kelly Rutherford has a small victory in her child custody case. TMZ

Chris Brown and Karreuche Tran are over. Hollywood Life

‘American Idol’ alum Chris Daughtry landed in hot water after the folks over at Fox & Friends requested a song to honor the anniversary of D-Day, and Daughtry bailed, claiming to be “off the clock.” While it’s easy jump on the bashing bandwagon, this has clearly been blown out of proportion. First, Fox & Friends is filled with unprofessional hosts who should have planned this request in advance rather than awkwardly standing around the stage in a clumsy silence. Second, it’s obvious that Chris Daughtry freaked out at the request, which has been confirmed via his apology. He was afraid he’d botch the lyrics, and since he’s a professional, he knew that a failed attempt would be widely circulated. Last, can we stop assuming the absolute worst of people? Watch the video below and judge for yourself. I’d have bailed too.