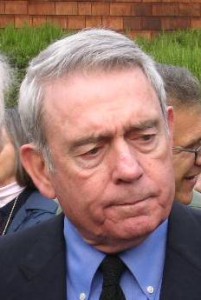 At age 80, Dan Rather may be trying to embody one of his many memorable quotes: “You can’t be a good reporter and not regularly be involved in some kind of controversy.”

Rather unceremoniously parted ways with CBS after an infamous 60 Minutes segment about George W. Bush going AWOL during his Vietnam-era stint as an Air National Guardsman. The September 2004 story was based on photocopies of memos criticizing young Bush’s performance, but the documents were widely debunked as fake. CBS commissioned an independent investigation of the debacle and Rather, among others, was faulted for failing to properly vet the documents. Rather left CBS in 2006, after 43 years with the network.

At first, Rather apologized for the incident, saying that CBS news could no longer vouch for the authenticity of the documents. But he eventually changed course, indicating that CBS was too quick to fold and proclaiming, “Nobody has ever proven that the documents were not what they purported to be.” On September 19, 2007, Rather sued CBS for $70 million, alleging breach of contract and fraud, but one of New York State’s Appellate Divisions dismissed the case in 2009.

Now, Rather is on tour promoting his new book, Rather Outspoken: My Life in the News. A large part of the book deals with his departure from CBS and his ongoing tirade against what he perceives as the corporatization and trivialization of American journalism. In the book he says that CBS chief Leslie Moonves has a “spine of Jell-O.” In Rather’s opinion, while Moonves is a great asset to the entertainment division at CBS, he has undermined the strong history of CBS news. He also describes Katie Couric, who anchored the CBS Evening News from 2006 to 2011, as “News Lite.” On a prior occasion, he opined that it was a mistake to try to bring the “Today show ethos” to the CBS Evening News, and to “dumb it down, tart it up in hopes of attracting a younger audience.”

When Dan Kurtz recently asked Rather to appear on his CNN show Reliable Sources, Kurtz received no response. Kurtz talked about Rather on his show anyway, and he asked the question that many of us our wondering, “Why is Dan Rather still pushing and defending this story, this discredited story?”

Some sources says he has spent more than $5 million on his crusade. As a sage friend of mine pointed out, if he would have just dropped it, people would have long forgotten about the Air National Guard incident. So why won’t Dan Rather take my friend’s advice and just drop it?

Could it be that he is simply carrying a chip on his shoulder after his fall from grace? Or maybe he was forced to endure years of corporate and political limitations on his journalistic freedom while working for CBS, and after he left his post he is now free to cry out.

Whether he is a zealous champion of real American journalism or a stubborn, 80-year-old Texan (or both!), his actions do seem to ensure that he will not soon be forgotten. While his ratings towards the end of his CBS career lagged behind those of NBC’s Tom Brokaw and ABC’s Peter Jennings, his dogged tenacity and borderline liberal conspiracy theories may ensure that his Wikipedia entry is more oft-viewed than either of them.

Remember my previous post about branding your image in Hollywood? I officially take that back. Richard Simmons has been wearing the same workout outfit for a gazillion years, and his appearance on Wendy Williams was no exception. He’s a bit of a cartoon character, and since I’ve seen him actually make some good points in interviews, I find it off-putting that he is perpetuating this goof-ball shtick. I’m not advising him to act like Dan Rather, but it’s just getting old. Plus, whenever I see any man (no matter how good looking) in running shorts, I seriously want to vomit. Is there any outfit less flattering?