Skip to content
I’m unsure when the Elton John/Madonna feud began, but it appears from my research that Elton John started it at the Q awards in 2004 when he insulted Madonna’s previous win in his acceptance speech, saying, “Madonna, best f***ing live act? F*** off! Since when has lip-synching been live? That’s me off her f***ing Christmas card list but do I give a toss? No.” He continued his tirade at last night’s Golden Globes during the red carpet, saying that she didn’t have a chance in hell of winning the award. After the win his partner, David Furnish, posted a furious message on his facebook page, saying, “Madonna. Best song???? F**k off!!!” Madonna winning Best Original Song truly shows how these awards have nothing to do with merit. Her acceptance speech was embarrassing in its narcissism. And her criticism of Gaga shows how desperate she really is.” Wow — either Elton John is a sore loser or there’s information about his relationship with Madonna that we don’t know about. Did she kick his dog or something? Watch clips from their feud below. 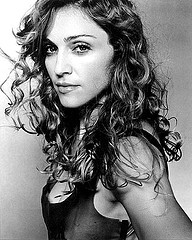 If you’re planning on courageously gifting Madonna with flowers at a press event, make sure hydrangeas are not involved.  A random fan brought her a hydrangea, and Madonna said thank you, before turning to her neighbor and saying, “I absolutely hate hydrangeas. He obviously doesn’t know that.” Thank goodness he didn’t get her carnations. Then she might have whipped out her French accent instead of her British one. Watch below.
I’m titling this post “song-a-like” instead of “music rip-off,” because unlike Lady Gaga’s recent Madonna rip-off, I think this one is up for debate.  A kind musician pointed out the similar choruses between Lady Antebellum’s Need You Now and Alan Parsons’ Eye in the Sky, but even he wasn’t convinced that it was intentional.  I guess there’s only so many ways to write music, and overlaps are bound to happen.  Listen below and judge for yourself. 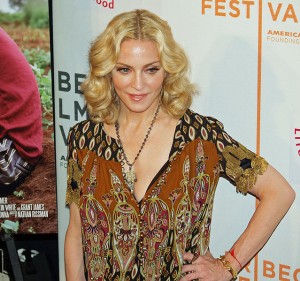 I won’t spend too much time on this, since I don’t think it’s even up for debate whether Lady Gaga ripped off Madonna.  Just listen to the two songs below and judge for yourself.  If you don’t think Born this Way is just a remix of Madonna’s Express Yourself, then I’d tell you to get your ears checked.  This isn’t the first time Gaga has been accused of ripping someone off — remember her Ace of Base song? Enjoy the songs below.

Madonna appeared on Ellen DeGeneres’ show to spout out some very obvious dribble. She said that bullying gay people is “unfathomable” and it’s akin to Hitler exterminating Jews. Yes, Madonna, we are all aware that it’s terrible to bully gay people. Furthermore, I’m sure that all the bullies of the world are watching Ellen DeGeneres and will stop their abhorrent behavior. Oh yeah — and they listen to Madonna. Perhaps we should get these bullies in a gay dance club and play Like a Prayer — that might solve the Middle East conflict too.

Michael Ausiello confirms that ‘Glee’ will devote another episode to the Queen.  It will happen next season, and will feature six more Madonna songs.  This is probably a great decision, given that I can’t seem to go anywhere without someone asking me if I saw Tuesday’s episode.  Yes I saw it and yes it was great.  I’m posting my favorite song from the episode below.