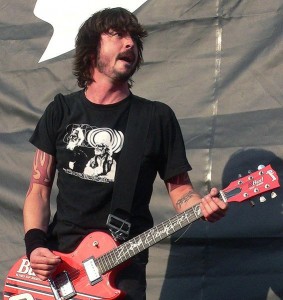 Anyone who knows me is aware that I’m secretly in love with Dave Grohl. This isn’t because I’m some insane Foo Fighters or Nirvana fan, it’s simply because I’ve read a lot of Grohl interviews and listened to him on Howard Stern. I think the guy is brilliant. He’s openly discussed the pain he felt after Kurt Cobain’s death and he’s navigated the Courtney Love disaster with an incredible amount of class. Also — he’s a rock star who doesn’t do drugs. That means if my fantasy were fulfilled, I’d get the sexy man with none of the baggage. So I’d like to take the opportunity to extend a major congratulations to the Foo Fighters for their album hitting number one. It’s their first number one album of their career, and they even knocked Adele off her slot. These guys deserve it.

Because I’ve stopped watching American Idol this season, it only makes sense that I’d come across Casey Abrams’ performance of Smells Like Teen Spirit via the brilliant Joel McHale, who tore it apart on The Soup. I’ve been told by a close friend that my blog has become “too negative” and all I can say is that someone has to point this out, and I’m the fortunate volunteer.  To be fair, most of the performances on that night were pretty terrible, because the theme was “the year you were born,” which has always proven to be a disaster for the Idol contestants.  When I first saw the video below, I had to see what the judges said, and it’s official — they are completely crazy.  They actually liked the performance.  Bring back Simon Cowell.