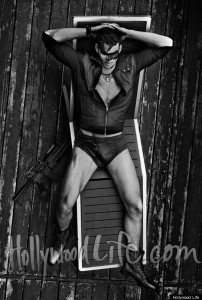 Though I usually do not take the time to insult people on The Dishmaster, today I will make an exception for Kris Humphries, who has quite possibly accomplished the least sexy attempt at sexy in the history of photography. What on earth was he thinking? Allow me to explain the lack of sexy. First, women aren’t as visual as men, so unless he’s trying to appeal to gay men, it’s pointless to take the Anthony Weiner route. Second, for those that know me personally, you’re aware of my bulge-predictor tactics, which I won’t elaborate on for fear that I will move this blog to R-Rated territory. Let’s just say that what some women might consider an asset, I’d consider a big “NO THANK YOU.” And lastly, why is he wearing a Halloween mask? When I play bedroom-dress-up, I want my man to wear a police uniform and throw me around. I don’t want him wearing face-paint and little underwear. Kim Kardashian created a monster.
Howard Stern should give Benjy Bronk a raise. The Stern writer has gotten his ring-master’s name in the press on numerous occasions, most notably for asking Anthony Weiner if he is “more than seven inches.” His latest victim is Gloria Allred, who was set to introduce Herman Cain’s latest sexual-harassment accuser when Bronk took the podium to chant in Hebrew, followed by assurances to the press that he may or may not be the woman in question because perhaps he got “genitalia surgery.” Watch below.

When the Weiner scandal broke, I had a lot to say and a lot of questions. I turned to my male friends, asking them to explain why a man would enjoy online sex, especially when such online sex primarily revolves around pictures of his own genitalia. Plus, his wife is hot. So what gives? Is he an over-sexed guy in need of constant affirmation? Is his wife a prude? Perhaps he’s just a pervert? My guy friend kindly pointed me to Alec Baldwin’s article with the Huffington Post, which basically answers all of the above questions. And I’d like to close this post by saying — of all the celebrities I fantasize about having coffee with — Alec Baldwin is number one. 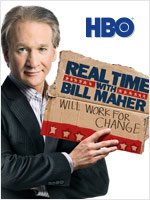 Bill Maher and Jane Lynch performed a dramatic reading of Anthony Weiner’s facebook sex chat, and it certainly put things in perspective. First, I love Jane Lynch. Second, Anthony Weiner clearly has no idea how to turn a woman on. And lastly, the Weiner issue is about as serious as Jane Lynch and Bill Maher portray it below. After the performance, Jane Lynch joined the panel to discuss whether Weiner should resign. Shockingly, Joshua Green and Sharon Waxman think the Weiner issue is worthy of resignation. Why? Because of the distraction, of course. When Janeane Garofalo wisely said the media (not Anthony Weiner) is responsible for the distraction from real issues, Green and Waxman brushed her off. Here’s my question: do Republicans have sex? Watch below for a laugh.
END_OF_DOCUMENT_TOKEN_TO_BE_REPLACED

“Ted Kennedy essentially ran away from killing a woman . . . and he went on to become a senator that was honored and respected. In the history of scandal . . . this guy sexting a picture of his cock in his underwear . . . this poor motherfucker didn’t even get to fuck any of these broads.” Howard Stern’s take on the severity of the Anthony Weiner scandal.

With the news that Congressman Anthony Weiner sent random women pictures of his penis, it’s only the next logical step that the world would turn to The Daily Show for Jon Stewart’s reaction. Unfortunately for Stewart, the comedy gift horse comes with a price. He and Weiner are friends, which leads Stewart with an uncomfortable task. Watch how he handles it below. As an aside, can someone explain why men think women want to see pictures of their private parts? Women aren’t visual, so looking at a bulge in your boxer/briefs isn’t going to ruffle my feathers. What happened to the good old days of sending flowers?
END_OF_DOCUMENT_TOKEN_TO_BE_REPLACED