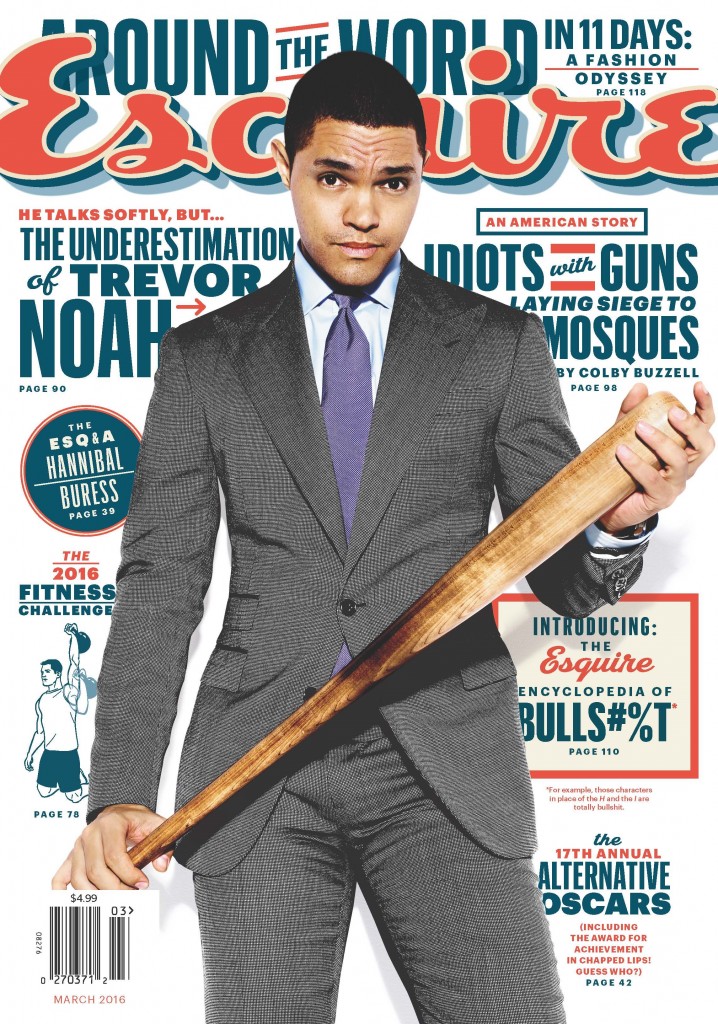 Trevor Noah covered Esquire, and the new host of ‘The Daily Show’ gave an honest take on the challenges of his role, his heritage, and taking the reigns from Jon Stewart. Read some quotes below, and visit Esquire for more.

Growing up in Apartheid South Africa:

He was an outsider, an interstitial kid: too white to be black, too black to be white. And he was funny. “I was a little shit. My dad’s friends used to complain that I had a radio in my chest…Let’s say a group of white kids were about to fight with a group of black kids. You could break the tension with a perfectly placed comment and crack everybody up. And now, once they’ve laughed, they can’t fight. Because now they’ve broken that facade of impenetrability. That was always my favorite thing…to pierce a moment with a well-timed joke.”

Flying as an African during the Ebola scare:

The man taking temperatures walked right past him, because Noah didn’t look African enough. “I’ve never felt so conflicted in my life…Don’t get me wrong, I never want anyone to think I have Ebola, but I also don’t want anyone to assume that I can’t have Ebola.”

Jon Stewart warned him about the anger. Staying in this business and mainlining the politics of either side can make you an angry person. Certainly Stewart was consumed by it at the end; the job aged him like a president. “But that was the reason he said I should do it, because I’m not angry. So for me, it’s weird when people are like, Why aren’t you angry? Because maybe the conversation doesn’t need more anger. Maybe that’s what’s not going to help.”

How he grabs audience’s interest:

Maybe it’s a two-minute explainer. Maybe it’s a quick news update for digital. ‘If you just have those, people go, That’s how I get my news every morning. I click on that, dedicate two minutes, then maybe watch another two minutes. I’m saying we should do it like drugs – make the news like drugs. Give them a little taste and get them coming back, and then we charge them.”

While stuck on an airplane to LAX, I stumbled across the O’Reilly Factor, and in an effort to keep an open mind to all sides of the debate, I begrudgingly watched Bill O’Reilly’s Ferguson coverage. The entire O’Reilly rundown reeked of racism, with claims about a plea to focus on black-on-black crime, in addition to statistics meant to suggest that racism is a thing of the past. But only Jon Stewart could adequately express the outrage. Watch Larry Wilmore’s look at the issue, with great quotes such as, “Quit calling it black-on-black crime. It’s just crime,” and “I have a dream. That one day, the actions of a few sh*tty white people will be seen as discrediting their entire race.”
Jon Stewart’s bad joke landed him in the penalty box with some pissed of Americans who look to the lauded political satirist for their daily sanity. When asked by Christiane Amanpour if he voted, Stewart sarcastically said he “just moved and [he] doesn’t even know where his thing is now.” The flip remark sent off a firestorm, with most people rightfully suggesting Stewart demeaned the voting process as unimportant. Watch the Daily Show host cool off the hot water with an apology below.
The comedic cowboy strikes again. In response to conservative crash-test dummies denouncing our President for his coffee salute, Jon Stewart steamrolled the worst offenders, saying “Fuck you for your false patriotism,” and pointing out that FOX News commanded respect for our armed forces while simultaneously laughing at a “boobs on the ground” joke by FOX News host Eric Bolling mere minutes later. In case you missed it, the bloated Bolling made a sexist joke about the UAE’s first female fighter pilot, thus offering far more disrespect than his station demanded of our President. Watch Stewart pounce on these partisan hacks below.

Jon Stewart returned from vacation with a must-see rundown on the tragic death of Michael Brown in Ferguson, and true to form, he enlightened the “media” on their embarrassing coverage of the events. With largely white talking heads describing racism through a racist lens, one can expect a problematic portrayal. But only The Daily Show’s stellar team of writers could package this in an easy-to-understand way for the Fox News media culprits contributing to the chaos. From Sean Hannity’s pompous, white privilege anecdotes about his own encounters with police to the “he who smelt it dealt it” spin on “only racists talk about race,” Stewart left no stone unturned. Watch him annihilate the network that cares more about Festivus than Ferguson.
Jon Stewart’s hit it out of the park with his segment, “Holy Shit, You Got Some Huge, Hairy Motherfu*king Balls on You.” My favorite subject of the segment was Barbara Walters’ interview with Herman Cain, when Cain told Walters that he’d like a Cabinet position in the Department of Defense, and Walters replied with, “What!” Stewart quickly pointed out that Walters didn’t even react that way while interviewing the Syrian dictator, Bashar al-Assad. Watch below.

With the news that Congressman Anthony Weiner sent random women pictures of his penis, it’s only the next logical step that the world would turn to The Daily Show for Jon Stewart’s reaction. Unfortunately for Stewart, the comedy gift horse comes with a price. He and Weiner are friends, which leads Stewart with an uncomfortable task. Watch how he handles it below. As an aside, can someone explain why men think women want to see pictures of their private parts? Women aren’t visual, so looking at a bulge in your boxer/briefs isn’t going to ruffle my feathers. What happened to the good old days of sending flowers?
END_OF_DOCUMENT_TOKEN_TO_BE_REPLACED

END_OF_DOCUMENT_TOKEN_TO_BE_REPLACED

If you’ve ever wondered how one of the greatest shows in television history gets made, then watch below to see the interview from last year’s Paley Center panel. In it, you’ll see The Daily Show writers discuss extremely short period of time they have each day to write Jon Stewart’s material. It’s shocking. Enjoy!