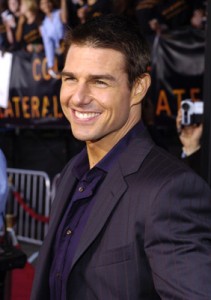 Despite the endless speculation about Tom Cruise and Katie Holmes being under some kind of contractual arrangement, I actually believed in them. I thought, “Maybe they are really in love, and Tom Cruise is just a victim of the Hollywood-rumor-mill. But just when I got comfortable with the couple, they’re done. That’s not to say it was ever fake, but let this be a lesson to everyone doing interviews about their relationship — be careful what you say and how you say it, because no one wants youtube-couch-jumping evidence of the way it used to be. As an aside, this will likely help both of their careers. Holmes lived in his shadow, and Cruise never quite recovered from his Oprah interview. As a unit, they professionally suffered, and this brings them back to reality in a more relatable fashion.
There’s a rumor floating around that Katie Holmes is pissed about Anne Hathaway’s Saturday Night Live impersonation of her.  TomKat’s camp denies this, but since they didn’t publicly say it was funny, I’m guessing they hated it.  The impression is so dead-on accurate, I think Anne Hathaway actually did Katie Holmes a major favor.  Pehaps she should take the time to study the impression so she can figure out why she comes off so strange in interviews.  Watch below.  It starts around the three minute mark.