Skip to content
Hollywood’s heavy hitters made a red-carpet appearance for Relativity Media’s ‘Paranoia.’ The film hits theaters August 16th. Check out some of my favorite photos below.
And you thought your life was ridiculous. While I’m not a Miley Cyrus fan and rarely mention her on The Dishmaster, this story is too good to resist. Rumor has it that Cyrus took to twitter to take down her pops, demanding that Bill Ray Cyrus tell the truth within the hour or “she will tell it for him.” She then posted a picture of herself beside Dylis Croman, who starred with Billy in Chicago on Broadway. The demanded and accompanying photo has obviously led many to assume Miley’s outrage surrounds an affair between her father and Croman. All the tweets have since been deleted, with a comment from Cyrus saying, that her twitter is “acting crazy.” Um . . . something’s acting crazy and it might not be twitter.

This might be the right time to remember the finer days when celebrities had zero access to the general public. Those digital muzzles were made for people like Miley, who can’t seem to control her own impulse to damage her own PR with personal-life posts. In memory of better times, watch below for a vintage interview of Miley and her father.

If Pink and Dracula had a baby, it would probably produce the new Miley Cyrus. That being said, it pains me to admit I like her new video. I find her style to be a bit inauthentic, given that it reeks of a desperate attempt to debut a new image, but I’ll give her the benefit of the doubt and assume her edge is god-given. I’m not a fan of her doggy-style simulations on the bed — but you can’t have everything I suppose. WATCH BELOW.
Miley Cyrus deserves a medal for this one. If the press is going to constantly speculate about your relationship status, you might as well have some fun with them. Cyrus tweeted an astoundingly beautiful selfie in what looks like a wedding dress.
If I didn’t like Miley Cyrus before, I definitely like her now. Why? Because only the coolest chick on the planet would wear a unicorn onesie while breaking it down to J Dash & Flo Rida’s “WOP.” 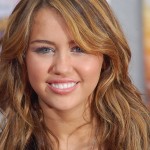 Attention Miley Cyrus: If you wear what looks like a diamond on your left ring finger, the public will think you’re engaged. And since you’ve been in the business long enough to realize that — it can only be determined that the move is a desperate ploy for attention. Take the ring off and stop acting like the media is ridiculous for their inquiry. There’s only one ridiculous person here, and I think you can guess who it is.

In a recent interview, Miley Cyrus complained about You Tube stars, such as Justin Bieber and Rebecca Black, saying, “It should be harder to be an artist. You shouldn’t just be able to put a song on YouTube and go out on tour.” Really Miley? You don’t want musicians to have a short cut into the music business? So what about your career? Do you think having Billy Ray Cyrus as a dad perhaps helped speed up your success a bit? Would you have had scored the same high-profile Disney audition otherwise? For years, Hollywood has been an impenetrable members-only club that excludes great talent because of limited opportunity for exposure. You Tube breaks that barrier. At least those guys did it on their own, without the nepotism.

Update: Miley Cyrus insists she was misquoted and she “loves Rebecca Black.” Yeah — sure she was.

Similar to Taylor Momsen, I’m done picking on Miley Cyrus.  TMZ obtained a disturbing video of her smoking from a bong, though her representatives insist it was salvia and not marijuana.  I’m not going to waste my time explaining the difference.  I found the video particularly disturbing because it looks like the person taping her intended to use the footage at a later date.  I might be reading too much Sherlock Holmes, but she kept the video on Miley the entire time, and also insisted that she wasn’t “fucked up enough.”  Usually when I’m filming at a party and someone says, “hey what’s that over there,” I move the camera to reflect what’s being discussed.”  Perhaps I wouldn’t move the camera if my cash-cow was high though.  Additionally, I’m convinced that this is the tip of the iceberg, and Miley Cyrus will soon join Lindsay Lohan in rehab.  Billy Ray Cyrus also saw the video, and released a statement, saying, “sorry guys. I had no idea. Just saw this stuff for the first time myself. I’m so sad. There is much beyond my control right now.”  If Billy Ray is reading this, I’m sorry.  I really thought she would come out unscathed.

A close friend of mine told me that he didn’t realize how bad he was in bed until he taped himself and his girlfriend having sex.  “I thought it would be hot,” he said, “but it was really depressing.”  Because of my nameless friend, I’ve decided to never tape myself having sex.  Oh yeah — and I don’t want to see my gigantic ass on camera.  Does anyone?  Apparently, celebrities love making sex tapes, and they love taking naked cell phone pictures even more.  So are they raging narcissists that are also too dumb to realize the possibility of either losing their phone, or pissing a man off enough to sell those pictures one day?  You might want to ask Miley Cyrus next time you see her, because she’s the newest celebrity involved in a naked picture scandal.  And this isn’t the first time.  Not too long ago she took racy photographs of herself in the shower, which made its way on the internet for the entire world to see.  What’s that quote?  “Fool me once, shame on you, fool me twice, I’m an asshole.”