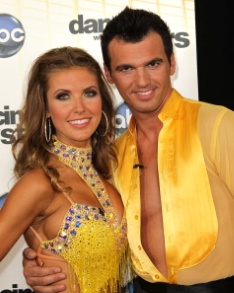 Judging from the clip below, Audrina’s new show looks like another peak into the boring lives of depth-less television stars. My patience for reality television is seriously waning (with the exception of Jersey Shore, of course). In the video below, Audrina’s mother apologizes for her drunken rant on Dancing With the Stars, and Audrina completely blows it off and says she doesn’t care what other people think. I’m no expert on alcohol so I might be wrong on this, but her mother looks drunk in the clip, which is ironic because she’s apologizing for her drunken behavior. Am I to seriously believe that Audrina is completely fine with her mother’s actions, and they’re one big happy family? All signs point to no, and unless they plan on taping some kind of intervention for what appears to be alcoholism, I don’t believe a second of that video. Again, I have absolutely no idea if her mother has a drinking problem, but I’m almost certain that this is faux reality hogwash.
If you watched The Hills or The City on MTV, you might remember the drama-free Whitney Port.  She managed to stay classy in crazy town, and she’s riding the success of her MTV career with a new book.  She appeared on Chelsea Lately, and after watching the interview below, I have absolutely no idea what the book is about.  Chelsea said there is “good advice” in the book, and then asked Whitney how to get rid of terrible party guests.  Whitney then said she had no idea, and she usually just “lets it play out.”  Wow, I’m going hit Borders tomorrow and pick that up.  Nothing like getting advice from someone that has no advice to give.  At least she bad-mouthed Olivia Palermo, though. I love a good cat-fight.
I’ve said it once and I’ll say it again — the prettiest brunette will always be prettier than the prettiest blond. Am I biased? — Sure, but I’m the Dishmaster, and I’ll be biased if I want. To prove my point, I’ve compiled a list of actresses that were born blond, but decided to die their hair brown instead. Why? — Because they look better, of course. Enjoy!

In closing, I’d like to confess that I took some liberties with the word “actress” in the title of this post.  Please forgive me.
‘The Hills’ is coming to an end – or is it?  Mtv confirmed that they are extending the final season of ‘The Hills’ to 24 episodes instead of the originally planned 12.  Kristin Cavallari is happy with the announcement, stating “I would like to do it. I’m in such a rhythm with things and I’m having a great time. We’re just now starting to get into some really good juicy stuff with a few new people. So I think we could do another 12 episodes and make it pretty good.”  I would be pretty pumped too if I got paid for an extra 12 episodes.  Remember that the cast gets paid per episode, so more episodes mean more money.  Good for them.  I hope they milk that show for all it’s worth, because something tells me they’ll all be hard up for cash when it ends.
According to Perez Hilton, Heidi Montag is accusing Adam Divello of sexual harassment, claiming that he touched her “ass cheeks and lower back” after her plastic surgery.  Montag allegedly claims that he also harassed the other girls on the show, who are afraid to speak up.  Well Lauren Conrad is speaking up – to defend Divello.  She said that she is “in utter shock at the allegations made against Adam Divello.  Not only are they completely absurd but they are100 per cent without merit – [he] is a true professional and a wonderful person to work for.”  If this is a desperate ploy by Montag to get more press, I imagine she will rot in hell.  Otherwise, sue the guy.  Going through Perez might not be the best way to put a stop to this sort of thing.

[Divello is standing next to Audrina in the pic above. If you don’t recognize Heidi, it’s because the pic is before her plastic surgery. Enjoy trying to find her.]

In an interview with Mtv, Kristin Cavallari seems unfazed by ‘The Hills’ ending.  I would imagine she is actually pretty disappointed.  She was brought on to resurrect the show after Lauren Conrad left, and I think Mtv hoped that they could get a couple more successful seasons out of it.  I also don’t think Cavallari helped matters much when she initially called the show fake, comparing their improvisation to ‘Curb Your Enthusiasm.’  Watch her interview below.
MTV Shows
I have to admit I am pretty bummed that the Kristin Cavallari takeover didn’t work out.  I never really liked Lauren Conrad much, but apparently the rest of America preferred her.  Since Kristen came on, the ratings have declined, and Mtv is pulling the plug.  This upcoming season will be the last.  It should be pretty good though.  Heidi will see her mother for the first time since her plastic surgery, Kristin will address the drug abuse rumors, and Audrina will appear with her current boyfriend, Ryan Cabrera.  Regarding Spencer Pratt, series creator Adam Divello confirmed that he is “dealing with some stuff right now,” but he will definitely appear in the final season at some point.
Radar Online is reporting that Spencer Pratt has been forced to leave ‘The Hills’ for six weeks to undergo anger management.  He allegedly screamed at a producer for the show in reaction to an undisclosed request.  The producer filed a complaint, and a six week hiatus was decided on as a settlement.  I guess all that cyber security hoopla was a crafty diversion.  We’ll miss you Spencer Pratt.
Ryan Cabrera, Audrina Patridge’s new boyfriend, will appear on the next season of The Hills. If you don’t remember Ryan Cabrera, he was a singer with a few minor hits, such as ‘On the Way Down.’ He briefly dated Ashlee Simpson, while he was being managed by her father, Joe Simpson. This might be a great opportunity for him to resurrect his career. Listen to his song below.