For somebody “connected to her truth” Julianne Hough sure spends a lot of time not talking about it. For those unaware, Hough and her husband, Brooks Laich, spent an unwelcome amount of time inviting the public into their sex life only to now shut the doors on the many inquiries about the status of their marriage. Hough and Laich are noticeably isolating in separate states during the pandemic.

On the June cover of Women’s Health Magazine Hough continued to say a whole lot of nothing including, “I believe in soul love, whatever that looks like. I kind of don’t believe in labels. It doesn’t mean that I won’t have a baby, etc. It just means that I’ve unplugged from what I feel like I should be doing versus what I actually want to be doing.” She furthered, “I believe we’re all dancers. We were much more self-expressed when we were kids. I’m trying to help people reconnect back to that inner child.”

Perhaps I wouldn’t object to the new Julianne Hough if she was honest about her personal life when it suits her AND when it doesn’t. Furthermore, if you’re going to boldly “live your truth,” maybe also defend the truth of others, including Gabrielle Union who had very public issues with America’s Got Talent. Hough notoriously avoided the topic (despite being fired at the same time as Union) during a press tour for Hough’s upcoming show. It’s not considered “bold” if you’re only speaking out when it suits you best. 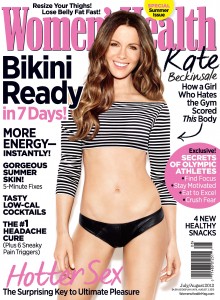 Women’s Health Magazine asked Avengers star Chris Evans a series of entertaining questions, though they failed to ask the most important one. Does he have that Captain America costume, and would he wear it in bed with The Dishmaster? Oops, that was two. Read some of his answers below, and click here for the rest of the interview.

1. Finish this sentence: Women don’t understand how much men want to. . .
Watch football on Sundays. And I know a lot of women who don’t understand that the whole day is going to be dedicated to football. That’s all we ask!

2. What might be a surprise to learn about you?
I’m a pretty decent tap dancer. I enjoy all types of dancing, actually. I get a couple of drinks in me and I stand up—it just happens.

3. What qualities make a woman marriage material?
I really like women who get emotional about babies and puppies. I’ve met some incredibly cool women who are tough, but the woman you marry should have a really soft side.

4. The ultimate turnoff is. . .
Arrogance and fake modesty. Nothing is worse than a beautiful girl fishing for compliments by saying how gross she is. On the flip side, I find genuine humility and modesty attractive.

5. Should girls play hard to get?
Oh God, I hate that! Nope, nope, nope. I just don’t like games in general.

I have to compliment Kristen Bell for her interview prowess. She’s a funny chick, and she’s not afraid to turn a serious interview upside down. Read below for quotes from her interview with Women’s Health Magazine.

“My favorite things on the planet. I want two round cupcakes, always. I kicked my buns and abs sets into high gear when I knew I’d have to be in my bra and underwear on House of Lies. But I don’t show my crack! All the Mr. Skins of the world are like, “ooh, Kristen gets naked!’ I’m like, ‘Dream on!’”

“If you had those beautiful chocolate bun-cakes, you’d show’em too, let’s be honest.”

Kristen on working with fiancé, Dax Shepard on their upcoming movie Outrun

“I would watch him walk back to the monitor and yell things such as ‘Action!’ or ‘Cut!’ and I’d just go, ‘And you expect me to work when you’re doing cute things around me all day? How am I supposed to focus?

He makes this delicious spaghetti dish… about twice a year. I wish he cooked more.[Actually] I don’t wish he cooked more. He’s a very good cook, but I’m quite territorial in the kitchen. It’s like, if I went outside and fixed the car, he’d be like, ‘Whaaat?’”

Kristen on her and fiancé Dax Shepard’s best friends

“We decided to create the first four-way marriage, where our couple has married their couple.”

Kristen on her relationship with fiancé Dax

“We nauseate ourselves with how mushy we are.” 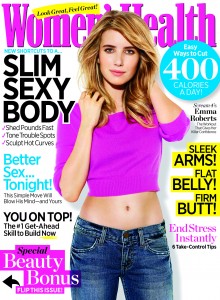 Aaron Eckhart recently interviewed with Women’s Health Magazine to promote his new film, Battle: Los Angeles, and he told the magazine about his ideal woman, saying, “I love women who will play tennis with me, cycle with me, ski, snowboard, surf… any of it. A woman who takes care of herself turns me on.”  Just when I thought that a Jew and a Mormon could live happily ever after, my dreams were destroyed.  Aaron’s disclosure reminds me of the time I got asked out on a date by an “active” guy.  When he asked if I like mountain biking, I said, “of course.”  I’m not quite sure what tipped him off to my lie.  Perhaps it was when I couldn’t get over a hill and fell off the bike into a pile of mud.  Though I still fancy myself “athletic,” something tells me Aaron Eckhart won’t be playing tennis with me anytime soon.