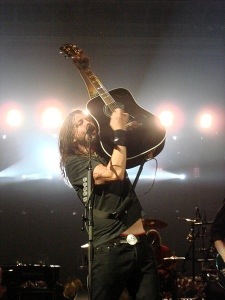 The Gods above gifted me with a clip of Dave Grohl discussing Justin Bieber’s Grammy “snub” during a Chelsea Lately pow-wow. Watch the rock legend engage in the gab-fest below, asking very astute questions, such as, “Is anyone really surprised?”
END_OF_DOCUMENT_TOKEN_TO_BE_REPLACED 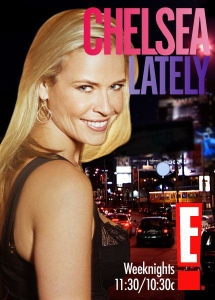 Chelsea Handler has officially cornered the market on getting A-list celebrities to do ridiculous things. This week’s winner is Sandra Bullock, whose very naked fight with Handler in the shower was not only hilarious — but revealing. Hats off to Handler for really committing.
END_OF_DOCUMENT_TOKEN_TO_BE_REPLACED

I first noticed Christina Hendricks had issues when she did an interview with Chelsea Handler at the beginning of her career. When Handler called her “voluptuous,” Hendricks became noticeably uncomfortable, and then repeated the word back with an annoyed tone. Since then, Hendricks has garnered a lot of attention for her body, with women everywhere citing her as an example of the non-anorexic-sexy-girl, but the Mad Men star has always resented it. Sure she’ll answer the question, but every single time she gets asked I can see her blood boiling. And that came to a head during an interview with Sun-Herald Fashion Editor Kate Waterhouse who called her a “full-figured” inspiration. Watch below.

The only tabloid story I hope dies a painful, hell-ridden death, is the Jennifer Aniston/Angelina Jolie/Brad Pitt love-triangle. It’s over, and the only people who can’t seem to move on is the media. And by “media” — I mean Chelsea Handler. In a recent interview, Handler took an unnecessary swipe at Jolie, saying she’s not a girl’s girl, and “she doesn’t strike [her] as someone [she] would have a close friendship with.” Though I appreciate her candor, she has to know that her comments will inevitably resurrect the love-triangle stories, and since she’s friends with Jennifer Aniston, I would imagine she’d be trying to do the opposite. It’s inappropriate.

Only Bethenny Frankel would disclose that it takes 18 months to desire sex again after childbirth, and only Chelsea Handler would take a sip of her guest’s drink, make a sour face, and insult it. Thank God they are giving Bethenny her own show. She deserves it. Watch below after the jump.
END_OF_DOCUMENT_TOKEN_TO_BE_REPLACED 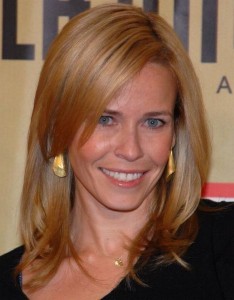 For those that think Chelsea Handler got her job because of her relationship with the head of E!, I’d encourage you to watch the video below. Piers Morgan attempted to spar with Handler, who trumped every one of his jabs with a better barb of her own. When Piers said Handler “bored” him during her appearance on Piers’ CNN show, she responded with, “why did you get fired from America’s Got Talent?” Piers then referred to Howard Stern’s Super Bowl commercial where Stern blasted children with a big hose, and said, “I’d love to blast you with a big hose.” Handler countered with, “too bad your hose isn’t big enough to blast me with.” Watch below after the jump.
END_OF_DOCUMENT_TOKEN_TO_BE_REPLACED

“The girl made it laying on her back fucking the President.” Joan Rivers on Chelsea Handler, referring to Chelsea’s former relationship with the then head of E!, Ted Harbart. To be fair, Joan said this to Howard Stern in response to Chelsea Handler’s attack on Joan Rivers from the day prior. The lesson? — Don’t piss off Joan Rivers.

I don’t think the video below is very funny. In fact, I think Chelsea Handler’s side-show, ‘After Lately’, is altogether humorless. That being said, Dave Grohl is incredibly hot, and I therefore have no other choice but to post it. Please watch and then envision The Dishmaster and Grohl living happily ever after. After all, we manifest our destinies, right?