Skip to content
Press interviews are for pop-tart style questions, and any attempt for a heroic exclusive in that three-minute period is more about the interviewer’s desperation than a search for actual answers. When Robert Downey Jr. entered his rotational junket to promote The Avengers: Age of Ultron, he certainly didn’t expect a “Diane Sawyer” style inquisition. As a result, the only thing Krishnan Guru-Murthy accomplished was a bold walk-out from a seasoned pro sans any answers. Good job, clown. Maybe next time you’ll take the first two cues from your talent and change course. You’re no Howard Stern.
I feel a special connection with Robert Downey Jr. given our extensive love affair that’s been going on for years in my mind. Watch him on Jay Leno promoting The Avengers, and you too might fall in love. Hands-off though — he’s exclusive to The Dishmaster’s fantasy-man list. 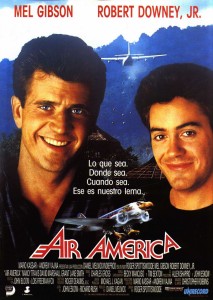 I appreciate Robert Downey Jr.’s plea for the world to forgive Mel Gibson, and I have always loved Robert Downey Jr., despite his issues. But there’s a major difference between Downey and Gibson’s life-troubles. Robert Downey Jr. was a drug addict. Everyone rooted for him to overcome his addiction, and the public welcomed him back when they felt he recovered. But Gibson’s problems far exceed addiction (though alcohol was clearly involved). America thinks that Mel Gibson is a bigoted wife-beater. The only way to recover from that is to convince the public that he’s changed, and that he deserves a second chance. But Mel Gibson has done nothing to warrant that belief. Does he hate Jews? Is he racist? Did he beat his girlfriend that night? Everyone knows his father is a holocaust denier, yet Gibson never publicly addressed it. When Diane Sawyer asked him to comment, he defensively suggested that the interview was about him and not his father. That’s just not good enough. Unless he’s honest and he can prove that he doesn’t have hate in his heart, he will be forever banned from the industry — whether Robert Downey Jr. likes it or not. My suggestion for Gibson is that he sit-down with Barbara Walters, who is not only a genius at resurrecting careers through tearful truths, but who is also Jewish. It’s a win-win if he’s willing.
Robert Downey, Jr. is the new voice for Mr. Peanut, and I don’t think I need to tell you about my excitement.  I’m hoping that this is the beginning of Downey invading every facet of my life.  If I can just get him to sell some Dove soap, then I’ll not only think of him when I’m eating peanuts, but I’ll also get to think of him when I’m lathering up in the shower.  Oh wait — I already do that.

This movie was a breath of fresh air, which is a strange statement because Robert Downey, Jr. spent most of the film feeling suffocated by Zach Galifianakis’.  It was light-hearted and funny with just the right amount of gross-out humor.  Galifianakis and Downey drive across the country together after they end up on a no-fly list.  Under no other circumstances would these two men hang out, which is why the film is so great.  Downey is a tightly wound guy who is a bit of prick, and Galifianakis is a sweetheart who likes everyone but is liked by no one.  I don’t think this movie could have survived without these two actors, and it’s worth seeing just for their performance.  Plus, have I mentioned I’m in love with Robert Downey?

Remember when I said Robert Downey, Jr. was either the best interview or the worst interview? Watch below to see when he’s the best.

Robert Downey Jr. is either the greatest interview or the worst interview.  When you piss him off, he’ll let you know.  While promoting his new film, Due Date, on The Today Show, Meredith Viera asked him some very uncomfortable questions about his friendships with Mel Gibson and Charlie Sheen, and Downey didn’t look pleased.  He insisted that Gibson hired him when no one else would, and when asked what he would say to Charlie Sheen, Downey said, “whatever I would say to him.”  There’s nothing that annoys me more than asking a celebrity about other celebrities during their interview.  If you can’t land Mel Gibson or Charlie Sheen to interview, then why not ask Robert Downey, Jr. about them, right?  How about next time Meredith asks Robert Downey Jr. about Robert Downey Jr.

Comedian Frazer Smith interviewed Robert Downey Jr. at the Los Angeles Laugh Factory, and it’s pretty funny.  Watch below.
Robert Downey Jr. had a hilarious interview on Howard Stern today in which he answered questions about everything under the sun, including: his sex life with Susan Downey; his take on Don Cheadle replacing Terrance Howard in the ‘Iron Man’ sequel, his therapy sessions, and whether he is currently sane. Downey did not disappoint. He was a great sport, and my favorite part was when Stern told him that he heard about his gigantic penis, and Downey humbly deemed himself “average.” I think he was just trying to make Stern feel better about Stern’s tiny penis. So sweet of him.