Gimmicks can go terribly wrong, but in the case of The Masked Singer and its mysterious head games (pun intended), FOX got it right. The fun format features celebrity performers in an elaborate costume, and it’s up to the judges (Nicole Scherzinger, Jenny McCarthy, Robin Thicke and Ken Jeung) to guess their identity. Billed as “TV’s wildest singing show,” it’s a fun twist on a tired, competitive format that has over-saturated the market. And the best part? The guesses are all over Twitter, including a hilarious tweet from T-Pain who many think is last night’s “monster.” See below, along with videos from the show.

What in God’s name is everybody tweeting me about?!?!

In what can only be described as a disastrous judgment call, Jenny McCarthy and Donnie Wahlberg welcomed cameras into their home for some faux fights, fake sleeping, and unhealthy early exposure to fame for her son. In the clip below, you’ll see the worst acting job from Jenny ever, especially given that she was obviously awake for the crew’s arrival, which means her puckered lips, perfectly tossled hair, and nude makeup fools no one. This show is a joke, and while I expect it from Jenny, I am disappointed in Donny. 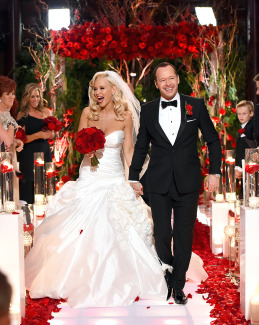 All celebrities swear their relationship is strong enough to survive reality television, despite overwhelming evidence against it. In a shocking move, Jenny McCarthy and Donnie Wahlberg have boarded the same crazy train that saw the demise of far too many marriages. While I’m less surprised by McCarthy’s move, Wahlberg’s compliance is confusing. He’s an actor with credible credits, and his pop-star, NKOTB status likely secured enough finances for his entire family. And if they plan to restrict the show’s access to secure their privacy, the content will inevitably fail. This is a lose-lose proposition, and it’s not only creatively questionable, it’s also dumb.
Jenny McCarthy delivered some dynamite deets on Donnie Wahlberg’s bedroom behavior, most notably the shape, size, and color of his manly member. If only this version of McCarthy had voiced her voracious sexual appetite on ‘The View.’ Watch below to see McCarthy tell Andy Cohen, Tom Bergeron, and the entire Watch What Happens Live audience about Donnie’s man meat.
After endless tests, internal discord, backstage drama, and public pleas from interested parties, The View has finally selected their new panel, which will include: Whoopi Goldberg, Rosie O’Donnell, Nicolle Wallace, and Rosie Perez. The daytime chat-fest has had a well-publicized refresh since Barbara Walters retirement, which preceded the exit of Sherri Shepherd, Jenny McCarthy, and longtime Executive Producer Bill Getty. Wallace served as communications chief for President George W. Bush’s reelection campaign and advised John McCain’s 2008 campaign. She is also a political analyst for MSNBC, and a smart choice for the network. The View needs a right-wing woman who can offer an alternative take without being a combative, straight-party stumper (yes, that’s a hit at Elisabeth Hasselbeck). As for Perez, it’s clear ABC wanted a Latina woman with a name, and she fits the part. It remains to be seen how Rosie O’Donnell and Whoopi Goldberg will work together, as it’s widely known that Rosie has trouble playing in the sandbox with others. That being said, tension brings ratings, and when the competition is a cheesy fluff-fest (The Talk), it’s important to establish a discernible identity. Time will tell.
Jay Z and Beyonce put those breakup rumors to rest. HUFFPO

Ashlee Simpson and Evan Ross are married. Us Magazine

Brad Pitt finally made an honest woman out of Angelina. Pop Bytes.

Britney Spears is single, and her father is a superhero. FashionStyle

Travis Barker remembers DJ AM on the 5-year anniversary of his death. Daily Mail

Lindsay Lohan had a miscarriage. NYDN

Dave Grohl is having a third child. People

Brandy broke off her engagement. Us Magazine

Lea Michele and Naya Rivera had some on-set drama. TMZ

Khloe Kardashian is cozying up to French Montana. E! Online

At this year’s Golden Globes, Jim Carrey poked fun at Hollywood hot-topic Shia LaBeouf, saying, “Dying is easy. Comedy is hard. I believe it was Shia LaBeouf who said that.” Shia returned the bite with a boulder, posting a YouTube video of Carrey’s daughter’s band, saying, “At least I don’t get arrested for indecency on major LA highways! Or abandon love child’s.” He later deleted the tweets, saying, “Jim Carrey states that he is deeply involved in his daughter’s life—I accept that. Regret tweet on the matter. Apologies to both parents.” The first attack and the subsequent apology are predictably plagiarized, or as Shia might say, “artistically inspired” by Rupert Murdoch’s twitter feud with Hugh Grant. Jenny McCarthy came to Carrey’s defense, insisting that her ex-boyfriend was deeply involved in his child’s life, and all feud’s should be sans family attacks.

It’s become strikingly clear that Shia LaBeouf is adamantly out to prove some point on plagiarism. I have yet to discover what that point is, but that’s neither here nor there. His abstract attempt to defend his “art” (or the art of others, depending on your perspective), will likely sink his career. And while it’s fun to hit an easy target, when that target’s mental health becomes questionable, it’s imperative to relent. I’m on the fence about Shia’s state of mind, but this might be my last post about the star, given my moral standards. Watch below for Jenny McCarthy’s defense of Jim Carrey. 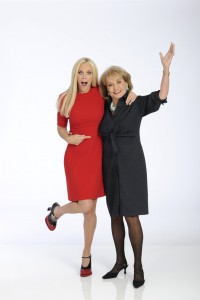 Julie Chen visited the King of all Media to promote ‘The Talk’ and she admirably answered the shock jock’s probing questions with honesty (except for the nose job one). One such question was whether ‘The View’ made a mistake with its new, non-politics direction. Howard Stern then asked about Jenny McCarthy, and Chen insisted that McCarthy is more suited for a pop culture format, and since ‘The View’ has always been known for hard-hitting topics, she simply doesn’t fit in.

ABC fell victim to a common error with its revamp. They listened to the public. While it’s true that public opinion matters, a major network should be led by their opinion, not bound to it. Elisabeth Hasselbeck was too contentious and off-putting, and she made ‘The View’ uncomfortable to watch while unwinding. That being said, just because one person is poisonous, that doesn’t mean the format should be entirely trashed. There are a million resources for pop-culture, and I have zero interest in watching a group of women debate what I can find in any other forum imaginable. But try finding a show that discusses political issues with entertaining, non-experts and a spoonful of sugar (there aren’t many).’The View’ was a resource to learn about intricate political topics with ease, and they have now become a bunch of girls gabbing about gunk. I get it. They want to be one with the times. Hopefully they will learn what those times actually are before it’s too late.

In a very candid interview with ‘Meet the Press,’ the Queen of all media discussed some hard-hitting topics about her future, her past, and ‘The View’s’ noticeable new direction. Watch below.