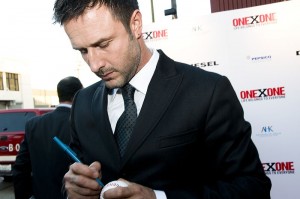 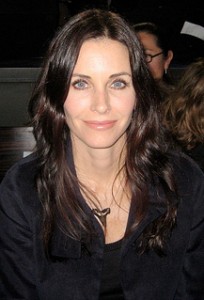 Courtney Cox is a crazy bag of nuts. She appeared on Howard Stern today to promote Cougar Town, and Stern predictably asked her questions about David Arquette. It was immediately clear that she’s still in love with him, and she’s jealous of Arquette’s new relationship. Need I go further? Can’t these two just work it out? It’s ridiculous. She’s just trading him in for a new man with a new set of problems.

For months, David Arquette has insisted to Howard Stern that Courtney Cox loves him, and she would appear on his show if not for her team of people advising her against it. Today marks the official day that Courtney Cox pushed her team aside to appear on the greatest show in the history of entertainment. She surprised Howard Stern to finally discuss her side of their marriage ending, and there were some great revelations. Stern asked Courtney why she rejected David’s sexual advances at Disney World, and Courtney said it “just wasn’t the appropriate time” and she “didn’t want to confuse the issue.” She also said that part of the problem in their relationship was that David could never emotionally console her without “getting a boner.” David accused her of “just being over him” and then said, “it’s time to move on.” Courtney replied with, “wow, that’s heavy.” She also said that even though he wants her back he seems happier now that he’s single. Stern didn’t seem to help the situation, insisting to Arquette that it’s “over and Courtney doesn’t want [him] anymore.” My favorite part of the interview was when Stern asked Courtney if it would freak her out if David dated Jennifer Aniston and she said, “yes, that would freak me out.” Stern then told David, “you gotta do it.” Overall, I’m still not sure if David and Courtney have any chance of reuniting, but I am definitely sure that I love Courtney Cox. Any girl who can air their dirty laundry on Howard Stern, is a cool chick. Listen to audio from the interview below.

David Arquette called into Howard Stern today for an exclusive interview about why he separated from Courtney Cox.  It was an honest and candid interview, which is surprising because most celebrities usually just say, “we grew apart.” Arquette said that things began to unravel while they filmed Scream 4.  Courtney bought David Arquette a motorcycle for their anniversary and told him that she “doesn’t want to be his mother anymore,” which basically meant that she was tired of nagging him about being more mature.  David interpreted that as a license to party, and it didn’t help their marriage.  Stern asked Arquette if he thought she had an affair with her Cougar Town co-star, Brian Van Holt, and Arquette said that, if anything, it was an “emotional affair,” because Van Holt is more verbal than Arquette, and Cox wanted someone she could have “deep conversations” with.  He also admitted to having slept with Jasmine Waltz “once or maybe twice,” and implied that Waltz tipped off the tabloids about having slept with him.  He insisted that he was already separated when he slept with her, and that it was Courtney’s idea to sleep with other people.  Stern suggested that Courtney allowed that because she wanted to sleep with Van Holt, and Arquette shrugged it off.  Arquette admitted that he constantly calls Courtney asking her to get back together, but he ultimately wants her to find someone to make her happy, and if he’s not that person, then so be it.  And there you have it.  I love David Arquette, and after hearing the interview, I’m sad for him.  Click the link below to hear a portion of it.

When I first heard about the idea of changing the name of Courtney Cox’s show, Cougar Town, I thought: what genius is behind this nonsense?  You don’t change a show’s name after it’s already made its way on the air, and you certainly don’t change it if it’s successful.  The main motive for the change is that Cougar Town transitioned from being a star-centered show, to more of an ensemble cast.  Plus, the word “cougar” has surpassed its fifteen minutes of fame and it’s now an excessively off-putting term.  Cougar Town producer, Bill Lawrence, discussed his desire for the name change in a pretty enlightening interview about how pitch meetings work.  The chief problem in the Hollywood of today, is that the people you pitch your show to are usually a bunch of half-wit neanderthals that couldn’t predict the success of a show with even a crystal ball in-hand (we’ve all heard the stories about how everyone and their mother passed on Marc Cherry’s ‘Desperate Housewives).  Lawrence gave a great example of this in his interview.  Picture this: you walk into your pitch meeting and say that you would like to make a show about a bunch of guys that work in a bar.  You would be kicked out of that meeting within 5 seconds – and Cheers never would have made it on the air.  So when the word “cougar” was becoming part of our everyday comedic vernacular, it seemed like the best way to pitch the show.  ABC jumped on it – and now they’re stuck.  While I agree that the title creates issues, I still maintain my original point: what’s done is done.  So I’m happy that it looks like Courtney will remain a cougar for the life of the series.

Courtney Cox admits that she refused to use a body double on her new show ‘Courgar Town,’ because wanted to “show the real side of 40.”  Ummm…..what?  Does Courtney Cox represent the real side of anything?  Her body is incredible and looks better than most 20 year olds.  I find it funny that she acts like showing herself in a bra and underwear was a huge sacrifice.