Skip to content
Full House returns with a 13-episode reunion, following a now adult DJ Tanner, her bestie Kimmy, and her sister Stephanie, as they move in with her to help her raise her teenage daughter. Fan favorites will hopefully guest-star on the show, assuming Netflix makes the right offer and they accept. As of now, the deals are up in the air. Watch John Stamos tell Jimmy Kimmel about the exciting new reboot.
John Stamos channeled his Greek heritage, his Playboy reputation, and his former Full House roots all in one commercial. Watch his much-anticipated Dannon Oikos Greek Yogurt commercial beside Bob Saget and Dave Coulier.
For Full House fans, this treat tops just about anything. John Stamos reunited with his television band, Jesse & The Rippers, for a throwback on Fallon. He even got Bob Saget to show up, along with his on-screen wife (and off screen love interest?), Lori Loughlin, for a full-on performance. Plus, there’s a mullet involved. Watch below.
Fans everywhere breathed a gigantic gasp when John Stamos revealed his off-camera romantic relationship with Lori Loughlin . Had they played their cards right, Uncle Jesse and Aunt Becky could have had a real-life full house . . . together! In fact, Stamos even admitted that his faux wife could be “the one that got away.” Interestingly enough, Lori seems to have aged backwards, if that’s possible. Watch the clip below.

If you’re a Howard Stern fan, then you know how much he loved his beautiful bull dog Bianca. He got the dog with his wife, and her full name was Bianca Romijn-Stamos-O’Connell-Ostrosky-Stern. Stern and his wife originally named her after their good friends, Rebecca Romijn and John Stamos, and after Romijn and Stamos divorced, the Sterns changed her last name to reflect Romijn’s new marriage to Jerry O’Connell. Stern often talked about his love for Bianca on his radio show. Of her recent passing, Stern tweeted, “Tough day today my friends. Thanks to all for all the kind messages. Give your dog a hug for me tonight.”

Glee fans everywhere should be up in arms.  We were promised John Stamos, and Ryan Murphy has yet to deliver.  So where is he, and why is his character always mentioned yet he never appears?  Stamos made a cameo on this week’s episode, but it was very unsatisfying.  First, I imagine that Stamos is being paid per episode, which means that he was given a full salary for that little thirty second appearance.  It baffles me that Murphy would waste a Stamos episode on such a small appearance.  Let me break this down for everyone so my point is clear.  A show only has a certain budget for guest talent, and it’s possible that Stamos is only being paid to appear on 5 episodes.  As a way to keep his character in the show for a long period of time for a limited cost, the characters keep discussing him, yet he never appears.  Translation? — it’s a cheap ploy to keep Stamos around as long as possible.  Literally — cheap.  So when he finally showed up for an episode, I was devastated to discover that his salary was blown on such a short appearance.  At least make him sing and dance if you’re gonna pay him. 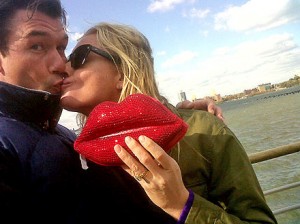